A gun would not have made a difference, it is insane to think otherwise

It is probably correct that a gun would not have helped in this peculiar instance, but there are special factors involved--Primarily the previously-mentioned hero, Greg McKendry. From what I know of the events, without him the tragedy would have been much worse. Heroes with enough balls to stand up against a shotgun while unarmed are in extremely short supply. Minor heroes brave enough to return fire when armed are much more common. I think I could be in the second category under some circumstances, but I don't see myself up to Mr. McKendry's stature.

I have yet to hear of a legal civilian armed defender who has made a situation like this worse.

The Unitarian church has an anti-gun policy. It is possible that this influenced the shooter, (whose name will remain unmentioned and unremembered here if at all possible) or at least its choice of targets--These types of shootings take place disproportionately where guns are not allowed. (Which brings me to....)


You are blaming the victims
The blame lays 100% on the slime with the shotgun. There was nothing the U/U church did to deserve this--Neither their gun policies or their gay-rights policies are to blame. Additionally, this sort of thing is so rare that absent a specific threat, specific preparation is not warranted.

It is irresponsible to have guns around children

In the presence of children, guns must be either securely locked or under the secure, direct and continuous control of an adult. Most holsters qualify. Most purses do not. In a huge majority of children's gun accidents there are obvious contributing factors, including a criminal living in the house, a significant case file with Children's Protective Services and/or domestic violence. Injuries are rare, injuries in normal, law-abiding middle class homes are extraordinarily rare.

You are using a tragedy to further your agenda

"After a shooting spree, they always want to take the guns away from the people who didn't do it."--William Burroughs.

This tragedy is no exception. The shooter used a hunting shotgun, apparently still equipped with a magazine artificially limited for hunting. "We aren't after your hunting guns"--What restrictions would have prevented this, without severely infringing the rights of the law-abiding? There is good and evil associated with guns. The good outweighs the bad, even if it is not as visible.
Posted by Sevesteen at 7:04 PM 4 comments:

Greg McKendry was a Hero

Greg McKendry was a hero. He was the unarmed member of the Tennessee Valley Unitarian Universalist Church who stood up and protected fellow members from the creature who came to kill. Apparently he was the first to resist, shortly followed by others who tackled the creature and kept him from killing more.

I don't know much about Mr. McKendry, don't know how he lived his life. Based on his last seconds, I strongly suspect honorably. The world would be a better place with more like him, and it is a poorer world without.
Posted by Sevesteen at 11:32 AM 1 comment:

I've got the deck framed, and most of the deck boards down. I intentionally didn't give myself any allowance for scrap, so I'm about 2 boards short, plus whatever I'll need for the landing. 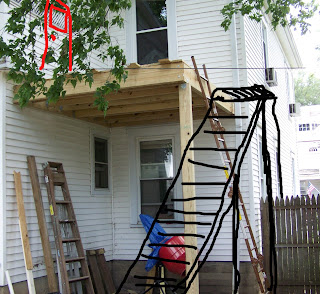 The plan is a set of stairs (something like this, although I've got a perspective problem in my sketch). Because of not wanting to dig through more rocks and crap, the farthest post will be offset to the other side of the fence. There will be a door to the current screened porch in back, although probably not red. The current porch is eventually going to be enclosed to use as an eating area to compensate for the tiny kitchen. 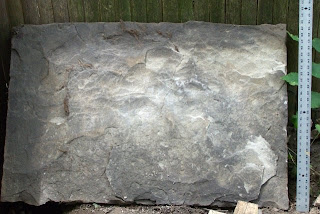 More archaeological finds--This chunk of slate is 30 by 42, by about 2-3 inches thick. I dug it up directly under where the landing will go, about 6 inches under ground.
Posted by Sevesteen at 2:24 PM 2 comments:

TD from The Unforgiving Minute pointed out that only people with a Google ID could comment here. Until the spammers come, I've opened it to everyone.
Posted by Sevesteen at 9:05 AM 2 comments:

The way Windows copies files is incredibly annoying. When you copy a large batch of files, and an error occurs, Windows just stops and waits for you to tell it what to do, instead of continuing with the files it can deal with. Worse, if it runs into a corrupt file, it will just quit, with part of your stuff copied, part not.

When you have to re-start a copy of a large folder, you will obviously wind up with a lot of files that already exist. Windows asks if you want to replace the old file with the new one, and gives you options--Yes, Yes to all, No, and cancel. The most useful option here would be "no to all", but it doesn't exist.

...except I just found out it does, sort of. Hold shift while clicking "No" counts as "no to all".

I'm copying my music to my new work laptop, and waiting for Windows to show me the duplicate file error--I know it is going to, because I've already copied half my music before I had to leave for work. Perversely, it appears to be copying the files in a different order than my first attempt. I know it is going to complain about duplicates and wait for instructions, but apparently it is going to wait for me to go to bed first...
Posted by Sevesteen at 12:10 AM No comments:

I'm building a deck on my vacation, spending about as much time correcting mistakes as actual building.

One of my mistakes was apparently where I chose to put the footers. 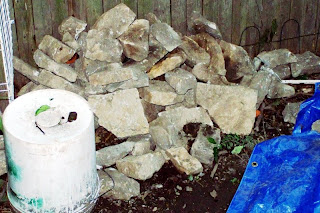 That's a 5 gallon bucket for scale. The pile of rocks is about 2/3 of what I had to remove in order to dig 2 holes 40 inches deep. After about 16 inches with the post hole digger, it was pretty much continuous rocks, all removed by hand once loosened up with various tools. When I pored concrete for the first hole and went to backfill, I didn't have enough dirt...Notice that the rocks are fairly clean. Old as our house is, there was apparently something on the lot before, and they built over rubble. 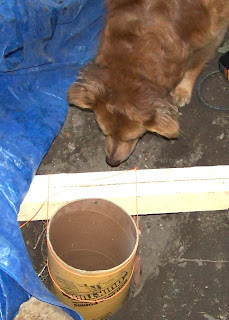 Bella is fascinated by the big holes in her yard. Before I got the camera out, she stuck her head in the form up to her neck. 20 minutes after Home Depot closed, I discovered I'm a bit short of the concrete I need, so I covered the hole with a tarp. She was still circling the hole with her ears forward, looking puzzled.
Posted by Sevesteen at 12:38 AM 2 comments:

I've started playing with pandora.com, and I'm hearing much more music that is new to me than I have in years.

Some of the newer rock has potential, but the way most new rock is recorded is so bad that it makes it un-listenable to me-It is virtually all over-compressed to the point of distortion, sounding muddy and unclear. Google loudness war for why, but a simplified explanation-

Other things being equal, most people will judge the slightly louder song of two heard back to back as better.

CD and radio have an absolute limit on peak volume.

There are ways to make a song sound louder without exceeding the limits of CD or radio. Done judiciously, it can even make the song better. Done to extremes, it adds considerable audible distortion, and drastically decreases clarity.

Record execs want their music just a little louder than the competition, and are willing to suffer the other sonic consequences to get there, Meanwhile, the competition is doing the same...Loud matters more than clear, because the competition isn't clear either, and people still tend to pick the louder of two muffled, muddy songs as better in a direct comparison.

Many people old enough to remember vinyl say they prefer the sound of a good vinyl album to CD. What they really hear is the difference in mastering methods rather than the medium. For various reasons extreme compression was not used on albums--Partly because the war had not started in ernest, but probably more that the medium didn't respond the same way.

Sony took advantage of loudness war the SACD format. A well-recorded CD is close enough to perfect that most people could not hear the difference between the original master and the CD made from it--Hard to promote a new format under those circumstances. While SACD is "closer to perfection", few can hear that aspect. The brilliant thing that Sony did with SACD was political more than technical--They included a specification for maximum average volume, with room for peaks above that. This means that a properly mastered SACD will sound clearer and "better" in almost any listening environment.
Posted by Sevesteen at 10:00 AM No comments:

Penn Jillette on Heller vs. DC

If everybody having guns in their homes means more people die, then OK. There is a right and a wrong beyond just safety--Live free or die, give me liberty or give me death.

Penn is technically a comic magician, but I wish he would run for office--I cannot think of anyone who regularly talks about politics that I disagree with less. I don't know if he could win, but he could sure make people think.
Posted by Sevesteen at 9:44 PM No comments:

Stupid reporting of a stupid story

In this article from Slashdot using a PC Magazine story as a source, they claim that a new law reqires that every PC repair shop in Texas have a Private Investigator's license. The PC mag story links to a CW33 TV post, which in turn leads to a Daily Texan article that finally explains a bit of the meat. The best story I've found is from the Austin American-Statesman, mentioned in the CW33 story, but not linked.

The actual law appears to be overly strict, but it is about analyzing data forensically, not in repairing a PC. There may be some cases that a shop would have to refuse, in order to remain technically compliant with this law but it is a far cry from "all repair shops need a PI license".

Slashdot can be excused, they aren't even claiming to be journalists. The rest of these stories (except the Statesman) either deliberately sensationalized (especially the CW33 that was obviously aware of the Statesman story) or at least neglected even minimal fact checking before sounding the alarms.

It would be really nice of journalists would occasionally say that on further investigation, there's no real story here.
Posted by Sevesteen at 11:24 PM No comments: