This reminds me of the old Roadrunner cartoons.
Posted by Sevesteen at 10:03 AM No comments:

The kitchen is mostly done, just some trim, and we may add shelves above the table.

The way the old window was, it would have been a little difficult to do drywall flush underneath--I was lazy and used a leftover piece of tileboard from the bathroom. Before we changed the window, the counter stopped about the same place the upper cabinets did--Just enough room for a dishwasher and sink, without the drawers. Eventaully I plan to redo the cabinet doors to match the drawers, but decoration isn't a priority until I get the downstairs ready to rent. 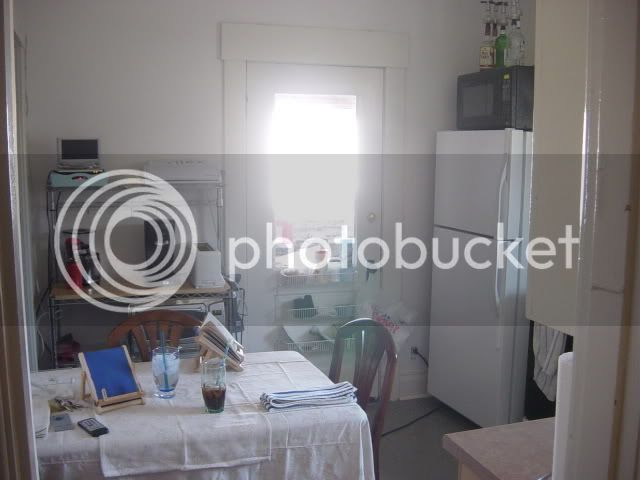 The back door originally had a window. I took the plywood out and made it a window again. That door leads to a screened in porch, but with no actual exit. I plan to build a deck and stairs this spring, and eventually enclose the porch and make a breakfast nook.

Finally, I'm getting my watch repair area set up again. My old bench didn't fit upstairs, so I decided to do shelves. I found some track lights on clearance: 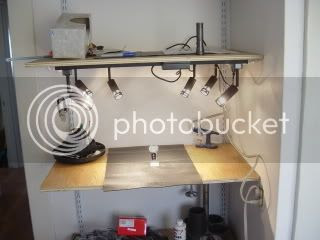 Now to unpack all my watch tools...
Posted by Sevesteen at 6:02 PM No comments:

Had the hard drive die in my laptop. Not totally dead, but bad enough that it wouldn't start, and I couldn't reinstall my stuff on it. I was able to boot with an Ubuntu live CD, boot from it and back up a bunch of stuff to a portable hard drive.

The whole recovery process has been relatively painless, considering. The physical installation of the hard drive is even easier than on a desktop--2 screws for the cover, 2 for the bracket. The drive plugs in, no cables to deal with. I found a SATA laptop drive at CompUSA's going out of business sale for $62

A neat thing about the Ubuntu Live CD--you put it in the CD and boot, and it comes up as a working and fairly complete Linux system, although a bit slower than a hard drive install. Click on install, answer a few questions, and it starts installing to your hard drive. However, while it is installing you can still work--I was on the web and IM while it was installing. You can also use the CD to play around with and see if you like linux, and if it will work easily on your computer, without changing anything.

I don't think I lost any important data--I was able to get my music moved over (most of which is backed up already) and I use Google for mail and RSS. I saved the profile from Firefox, and when I put it back and re-started Firefox was exactly like it was on the old computer.

Plug the printer in, and it just worked, no driver disks needed. Same with my PDA. This is the first time I've lost a Linux hard drive, and it is far easier to recover than when I've lost a Windows drive. Everything I need is online, and the system automatically finds it--I don't have to remember where I put the printer disk, or look up drivers for my printer and PDA.

This install has Compiz, the new fancy windows manager. A lot of what it does is just eye candy with little use--When you move a window, it stretches and wobbles into place, and when you close a window it shrinks and goes transparent. One thing I like is that alt-tab doesn't just show an icon of the programs in use, but a preview of the actual window, including motion. It doesn't seem to slow stuff down, so I'll leave it.
Posted by Sevesteen at 5:14 PM No comments:

I use Ubuntu Linux on my laptop, rather than Windows. Overall I like it better than Windows, and it suits my frugal nature. Generally works well, with few gripes--At the moment, the biggest is Update Manager, a very un-Linux like program. It does the job well enough, but it has some significant user interface flaws that are unusual in a modern version of Linux.

It is slow. When it tells you there is an update available and you click to install it, there is a pause. Then you look at the list, confirm that you want to install those updates. Pause. It asks for your password. Pause. If you start doing something else, it will pop a few windows up as it installs stuff, then finally it will tell you it is done.

The notification icon should have different colors--Red for critical security updates, yellow for enhancements, green for up to date, and maybe blue for can't connect to the update server. You should have the option to re-set the icons for the updates it has found, but still have it check for new ones. You should have the option to download the updates in the background, but not install until you approve of them. Finally, once you enter your password, the program should leave you alone until it is finished, and then just the program icon should blink. You should also be able to enter the password, but defer installation until a selected time later

Update Manager just installed an update of itself...So we'll see how much has changed
Posted by Sevesteen at 11:52 AM No comments:

I opted in to my employer's "managed vision care" through Eye-Med this year. I was checking out the various in-network providers, and found that I was better off going to Walmart Optical and getting reimbursed. The frames I wanted were at least $170 at the "preferred providers", leaving me with $50 in out of pocket costs. Walmart had nearly identical frames at $118, just under what I can get reimbursed for.

It turns out that most of the preferred providers (Sears Optical, Target Optical, JC Penny Optical, Pearle, Lenscrafters) are owned by the parent company of Eye-Med. Explains a lot.
Posted by Sevesteen at 7:55 PM No comments:

In my normal, day-to-day life, I am at a very low risk of being physically attacked. I think it unlikely that I will ever use my gun to fight back against an attacker. So why do I carry?

I want to have the right and ability to carry, separate from whether I chose to carry on any particular day. This is as much political as personal--I'm more concerned with the right than the few times I go where there is a significant chance of attack. Concealed carry by decent people benefits society--Where concealed carry goes to "shall issue"*, crime goes down faster than average. This is probably due to concern by criminals rather than criminals getting stopped by license holders--This decrease starts with the enactment of the law, before significant numbers of licenses are issued.

Getting the legal and practical ability to carry (Training, license and gear) is the hard part. Once that is done, the incremental cost of carrying on any particular day is very small. The risk that I'll need it on a particular day is also fairly low, but the penalty for guessing wrong could be very high. In many ways, it is the same as a smoke detector--If you thought you would need a smoke detector, you wouldn't stay there even if there were 10 of them. That doesn't mean you don't keep them in your own house. If I need a gun to go there, I don't go.

*Shall Issue is when licenses are granted based on objective criteria, including a clean criminal record, often a training class. "May issue" is when licenses may be issued, but there is no requirement that someone meeting the criteria be issued a license. Instead you have to convince the Sheriff that you are worthy. In some cases, political affiliation, campaign contributions and being the appropriate race are the primary criteria.
Posted by Sevesteen at 4:50 PM 1 comment:

Labels: amusing
Newer Posts Older Posts Home
Subscribe to: Posts (Atom)
I am libertarian-leaning, interested in guns, old watches, old Japanese motorcycles, books and politics. I like to debate--feel free to comment even (or especially) if you disagree with me.