The ABS light came on in my car, so I made an appointment to have it checked.
Meanwhile I put in a new stereo--the original was a cassette with 6 disk trunk-mounted CD.  The CD player wouldn't play CD-R's, and the cassette auto reverse was based on volume rather than end of tape.  This made using an adapter to play MP3's a problem, because at gaps it would reverse back and forth, and if you didn't start the MP3 player quickly enough it would spit the adapter out.
Turns out that diagnostics for the ABS system come through the radio plug, so the mechanic had to remove  the new radio to read the code.   And the factory radio shoved a splinter of plastic into my thumb as I was tossing it in the trunk, on my way to work, when I was running late.
The new radio is fantastic, and is working out just as I planned.  I've got music on the USB drive. I can shuffle either a single folder or the entire drive.  I have my music organized into folders based on what my wife and I both like, and what only I like, depending on who is riding.  I've got podcasts on a CD Rewritable, and they stop and start without losing my place when I start and stop the car--this was the main reason for the new radio, and alone worth the switch.
One minor downside is that apparently the VW antenna is weak, and apparently needs an amplifier.  I can pick up only one station.   Not a significant problem--I can't think of the last time I listened to the radio except for a short trip out of laziness.
Posted by Sevesteen at 9:31 AM No comments:

I replaced the stock stereo in my Beetle with a new low-end JVC that can play CD's, MP3's recorded on a CD, and MP3's on a USB drive.    I don't plan to use the USB drive for anything else, so I wanted it as small as I could easily get.    I could at least remove the folding cap, and figured I'd open the plastic up to see how much more length could be safely removed--If nothing else, remove the shell and use heat shrink tubing to cover the circuit board. 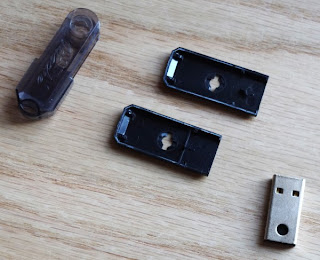 The shrink tubing turned out to be unnecessary.  The little metal bit in the lower right corner is the entire drive, the rest is just a handle.

The first replacement hard drive I ever bought was a massive 1.6 Gigabytes.  at least 10 times more expensive, and 100 times bigger.  Doesn't seem that long ago...
Posted by Sevesteen at 9:05 PM No comments: 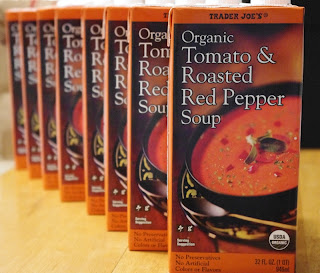 Campbell's tomato soup made with milk was one of the simple foods I missed most when I was in the Air Force.  The chow hall would often have tomato soup, but I think it was made with water-not sure the details, but it wasn't good.

Trader Joe's Tomato and Roasted Red Pepper Soup is the first tomato soup I've had that is better than what I grew up with.  The texture is right and the flavor is excellent--the peppers and spices make it a good bit more interesting without being excessive.   I don't get to Trader Joe's that often, so after trying this soup on our last trip,  I decided to stock up this time.

(Despite the periodic reviews of Trader Joe products, I'm not sponsored by them in any way)
Posted by Sevesteen at 1:20 AM 3 comments:

I read a lot of blogs in Google Reader--usually more than I can keep up with.  I use Reader's tags function to sort and prioritize--Blogs I never want to miss, comics in their own section, etc.  I've started to read blogs from my phone.  Unsurprisingly the G2 "Google phone" works very well with Google Reader-there is a dedicated app that downloads batches of blogs, so even with a painfully slow or spotty network connection the next blog post pops up instantly.

...except when the authors decide to only do a partial feed, only showing the first paragraph or so in RSS, requiring you to click to their site to read the rest.  I can kind of understand this for commercial blogs--although a better alternative is to include ads in the RSS feed.  I can't understand why noncommercial blogs  do this.

This was a minor annoyance when I was reading exclusively on a computer--but with the limitations of a phone, makes most partial-feed blogs not worth the effort.  I've decided that the vast majority of partial feed blogs that I used to read are going to the end of the line, into a different folder.   I'll only read them in the very rare cases when I'm caught up with everyone else.

(If you are using Blogger.com or Blogspot, fix this by going to Settings, site feed, and pick "Allow Blog Feeds Full")
Posted by Sevesteen at 1:09 AM 3 comments: 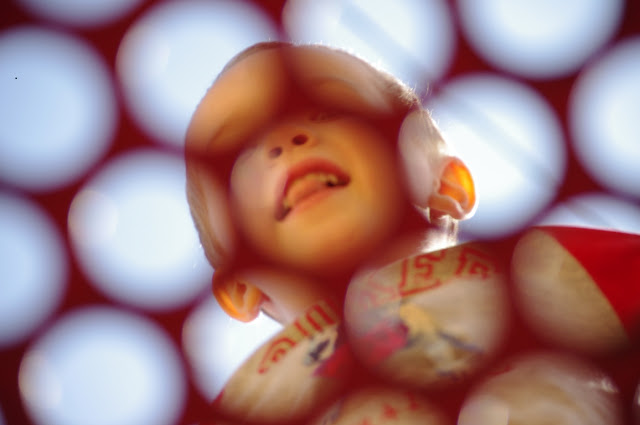 Grandson at the park.  Click to embiggen.
Posted by Sevesteen at 2:46 PM 2 comments:

Back in high school, I bought an Olympus OM-10 35mm Single Lens Reflex--manual focus, shutter priority automatic.  Took a bunch of pictures, lost the camera when I was in USAF tech school--but by then I was spoiled.  From then,  I disliked point and shoot film cameras, even though I do not have a particularly artistic eye.

Later I bought a used, fairly old Minolta SRT-101 with an f/1.2 lens because I was more than willing to trade the minor inconvenience of match-needle exposure and manual focus for better pictures and less reliance on flash.  Over the next few years, I bought a few more lenses, so when the camera died it made sense to find another used Minolta body rather than replace all those lenses.  This illustrates a point with interchangeable lens cameras--you aren't just buying a camera, you are buying into a system.  There is a good chance that your investment in lenses will eventually dwarf the cost of a body.

Although I did switch to a digital point and shoot around 2000, I still missed my SLR, just not enough to deal with film.  A point and shoot digital does an OK job in most situations, and since film is free, you are likely to get as many or more acceptable pictures as you could with a 35mm SLR--I used to hand a digital camera to my 5 year old niece and get great candid pictures at family events, mixed in with pictures of refrigerator, shoes and aquarium.  Nobody got camera shy when a 5 year old took their picture.

But even a good point and shoot has limitations compared to a DSLR.   A DSLR is faster responding in almost every way--time from 'off' to the first shot, time between shots, focus time, shutter lag, zoom and how fast you can find a subject in the viewfinder.   Higher end point and shoots can have the same number of pixels as a DSLR, but each pixel is much smaller--this affects image clarity, noise/static, low light sensitivity and the ability to control depth of field.

The picture above (click to embiggen) would not have been nearly as good with a typical depth of field--the background was cluttered, ugly and not relevant to the subject.  By choosing the right settings on a DSLR, the background can be left out of focus, concentrating attention on the primary subject.

A couple weeks ago Woot.com had a couple of different packages of Pentax K-x camera outfits, differing in lenses and colors.  I bought one with 18-55 and a 55-300 zoom lenses, only available in black.  I'm very impressed.  Automatic mode generally does a good job of figuring out what you are trying to do.  If that's not quite right, there the most common exceptions are available as presets on the main dial--portrait, sports, macro, lanscape and night portrait.  There are another handful of presets in the menu, and there is full manual control of almost everything.  Low light ability without flash is fantastic even with the limitations of the kit lens.   It can do about 4.5 pictures per second (depending on focus) for about 5 seconds, then it slows to about 2 per second depending on the speed of your memory card.

Pentax has kept a fairly surprising amount backwards compatibility with their older lenses, to the point where a 70's lens will do everything it did on the cameras it came with.  With an adapter lenses from the 50's will work with some effort--although significantly less than on a 50's camera.  You can set it to automatically take the picture as the image comes into focus, and if you tell the camera what the focal length is, image stabilization will work.  I'm going to be looking for a couple of old K mount non-zoom lenses from the 70's or 80's--if I'm happy with low light performance and depth of field control with the current lens that only goes down to f3.5, an f/1.7 or f1.4 should be awesome.
Posted by Sevesteen at 10:50 PM No comments:

I've been getting responses to job applications that I didn't send, apparently to a guy with the first initial and last name as me.  I finally found a copy of his resume on line, and sent him a text--


You are using the wrong email address when applying to jobs. [example]@gmail.com is mine--you can get your own gmail account for free

His response (cut and pasted):


Well I can do that but do you no about any jobs tryin to contact me ?

Posted by Sevesteen at 12:15 PM No comments: