I've decided that at least for now, if I'm going out of town on my motorcycle, I'm wearing long pants, jacket and gloves.  (In addition to helmet, of course)


I started with a cheap legal minimum 3/4 helmet that Walmart had.  I replaced it fairly quickly with a Snell-approved mid grade HJC that the local Honda dealer was selling--on a bike like mine without a windshield it is much more pleasant.  Not only does the full face do a better job of keeping the wind out of my eyes, the helmet is more comfortable and has better internal ventilation as well--with chin and head vents open while riding you can feel slight air currents, and there is no significant heat build up despite the black color.  (Would have preferred silver or grey, but the in stock choices were black or graffiti)
I bought an inexpensive Fieldsheer armored textile jacket that was on clearance at Motorcycle Superstore--a bit boy-racer for my taste, but I'm not particularly fashion-conscious.   Abrasion-resistant mesh, and armor over elbows and shoulders that meets some European specification that I've never heard of.  Fits OK, the zipper likes to get stuck where there is a front seam about 3/4 up, but generally comfortable.

What really surprises me is that wearing all this gear isn't hot while riding, up to at least 100 degrees-in fact, even at around town speeds, riding with long pants, jacket, helmet and gloves is less warm than being outside in shorts, short sleeves and flip-flops.   Stopping for lights can be a bit warm, and I've got in the habit of pre-staging the bike--push it out of the garage and load the saddlebags before I go in and gear up in the AC--that way I can just hop on and go.

I had someone argue that leather bike gear was better--that may be true, but I'll wear the textile jacket even in this weather.  Everyone has their own level of acceptable risk--I don't feel the need for leathers, but I'm more than happy with the gear I've got.
Posted by Sevesteen at 11:54 PM 3 comments:

Warning, video has foul language.
Canton, Ohio police see a car stopped, pull behind it to investigate.   Cops yell at 2 of the people involved for about 6 minutes, completely ignoring the driver--but searching inside the car.  After 6 minutes, they get to the driver.  First thing the driver says is "I've got a carry..." and the cop interrupts, demands the truth.  Driver explains, tries to offer his carry license.  Finally the cop realizes what the driver is saying, and flips.
Ohio law says that a concealed carry license holder stopped by a law enforcement officer for a law enforcement purpose while carrying a gun must promptly notify the officer.   It also says you must obey all lawful orders.   The driver wasn't perfect, but you shouldn't be expected to shout at or interrupt an angry police officer to stay within the law.  According to Ohioans for Concealed Carry, the prosecutor has offered to drop all charges in exchange for a promise not to sue.
In my limited experience with law enforcement, I've never had to deal with an officer like this, and never had a problem with notifying--the worst reaction I got was a local cop who once I notified would not let me get my own wallet out of my back pocket.   However, I will notify even if I have to talk over an officer.
As far as I am concerned, the cop in the video demonstrated his unsuitability not just in his dealings with the  license holder, but also with the others--'If I find you one more time tonight, I'm going to put lumps on you'.
Posted by Sevesteen at 1:40 AM 2 comments: 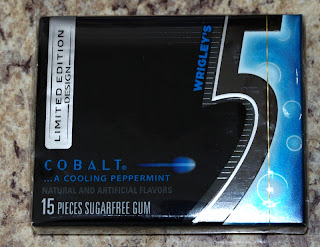 Huh?  It's gum.   You chew it.  It is in a stick, the same size and shape as the 'regular edition'.   Maybe the wrapper is different--but I don't have any to compare to, since I wad them up and throw them away.
Posted by Sevesteen at 12:29 AM 1 comment:

Apparently Michele Bachmann has signed "The Marriage Vow", a fundamentalist anti-gay pledge.  The pledge is below in italics, my comments in standard text.


The Candidate Vow:
Therefore, in any elected or appointed capacity by which I may have the honor of serving our fellow citizens in these United States, I the undersigned do hereby solemnly vow* to honor and to cherish, to defend and to uphold, the Institution of Marriage as only between one man and one woman.  I vow* to do so through my:


Personal fidelity to my spouse.
Should be between me and my spouse--Different people may have different agreements--fidelity is following your personal agreement as amended by mutual consent.

Respect for the marital bonds of others.
...except those we don't think should be allowed to marry.

Vigorous opposition to any redefinition of the Institution of Marriage – faithful monogamy between one man and one woman – through statutory-, bureaucratic-, or court-imposed recognition of intimate unions which are bigamous, polygamous, polyandrous, same-sex, etc.
Should not be the government's business to define marriage.  Marriage should be spiritual, between the parties involved and not to get government benefits.  Was Loving vs. Virginia a redefinition of marriage, previously only available to people of the right racial combinations?

Recognition of the overwhelming statistical evidence that married people enjoy better health, better sex, longer lives, greater financial stability, and that children raised by a mother and a father together experience better learning, less addiction, less legal trouble, and less extramarital pregnancy.
...but we don't want gays and lesbians to have these benefits.  There is certainly a benefit to having two parents who cooperate and care, especially when compared to having a single indifferent parent.  I have not seen any evidence that certain gender combinations are unsuccessful at raising children.

Support for prompt reform of uneconomic, anti-marriage aspects of welfare policy, ...
Not awful, I guess.
...tax policy, and marital/divorce law, and extended “second chance” or “cooling-off” periods for those seeking a “quickie divorce.”
What does this accomplish?

Earnest, bona fide legal advocacy for the Defense of Marriage Act (DOMA) at the federal and state levels.
How does restricting who can marry 'defend' marriage?

Steadfast embrace of a federal Marriage Amendment to the U.S. Constitution which protects the definition of marriage as between one man and one woman in all of the United States.
It is already too late for this amendment, you couldn't even get a simple majority to agree, and that support is diminishing every year.

Support for the enactment of safeguards for all married and unmarried
why not just say 'all' here?--is there a third classification of people besides 'married' and 'unmarried' that I'm unaware of?
U.S. Military and National Guard personnel, especially our combat troops, from inappropriate same-gender or opposite-gender
Again, is there a third classification?
sexual harassment,
From what little I know, we need to make a much stronger commitment to ending male on female sexual harassment in the military--a much bigger problem than gay on straight harassment.
adultery
How are politicians going to protect military personnel from adultery?
or intrusively intimate commingling among attracteds (restrooms, showers, barracks, tents, etc.);
Gay Cooties!  The gaze of a homosexual might....um....well...
(In the 80's, once I was out of tech school my barracks were co-ed, although we had separate showers)
plus prompt termination of military policymakers who would expose American wives and daughters to rape or sexual harassment, torture, enslavement or sexual leveraging by the enemy in forward combat roles.
...even if the woman involved is aware of the danger and has volunteered to serve--since awful things never happen to men in war.

Rejection of Sharia Islam and all other anti-woman, anti-human rights forms of totalitarian control.
More grandstanding, and overly simplistic.   If a couple with a family were married under Sharia law, are they no longer married in the US?

Recognition that robust childbearing and reproduction is beneficial to U.S. demographic, economic, strategic and actuarial health and security.
Huh?  This sounds like "have more children so the Social Security Ponzi lasts longer!"

Commitment to downsizing government and the enormous burden upon American families of the USA‟s $14.3 trillion public debt, its $77 trillion in unfunded liabilities, its $1.5 trillion federal deficit, and its $3.5 trillion federal budget.
Finally, another pledge I can agree with.

Fierce defense of the First Amendment‟s rights of Religious Liberty and Freedom of Speech, especially against the intolerance of any who would undermine law-abiding American citizens and institutions of faith and conscience for their adherence to, and defense of, faithful heterosexual monogamy
Only OUR intolerance should be tolerated.
Posted by Sevesteen at 1:12 AM 2 comments: 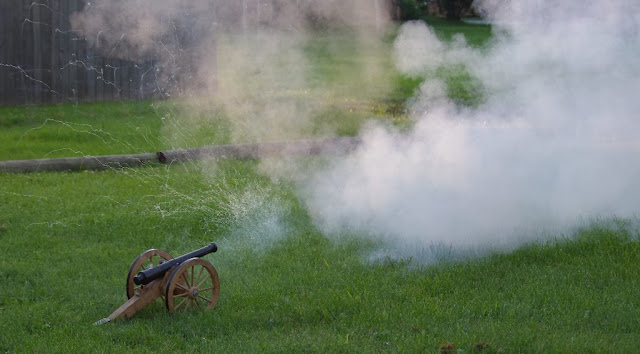 Brother in law's blackpowder cannon on the 4th of July.
Posted by Sevesteen at 10:18 AM 1 comment:

Agriculture contributes about $176 billion to the US economy.  Worst case, how low would that number be without the US Department of Agriculture?   25% less?  50% less?  No better or worse?