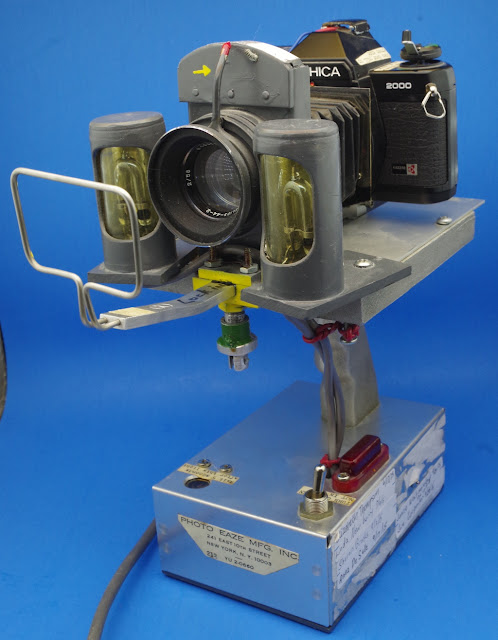 "The PHOTO EAZE CAMERA will permit an inexperienced operator to obtain professional results of the most difficult photographic areas or cavities of the body."  From the instruction manual that came with this camera....apparently despite its cobbled together appearance, this was a commercial product from a real company made for multiple decades, and the typewritten paper labels and blobs of paint are original to the camera.  The handwritten label on the side of the base appears to be from a previous owner.   (Click pictures to enlarge) 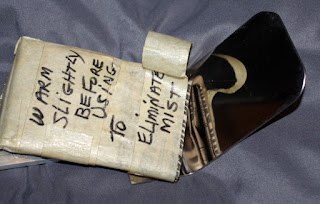 I think this particular camera is from around 1989.   The camera body is a Yashica FX-3 Super 2000, which was introduced in 1986.  One of the accessories is wrapped in newspaper from 1989 and held with masking tape, the handwriting matches the other notes, and other images of Photo Eaze cameras show similar wrapping and handwriting on a different camera.

The lens mount has been removed and a bellows permanently attached with phillips screws.  Lens is a Russian Heilos 44-2, possibly from a rangefinder--a very inexpensive lens, but likely adequate for the purpose.  A collar with a pointer is attached to the aperture ring of the lens, this points to an odd glossy label with numbers that do not correspond to normal F stops.  The mounting screw for the collar runs into a painted over blob, this appears to be deliberately preventing setting the aperture wide open.  Since this lens does not have a typical SLR auto aperture, the viewfinder ranges from slightly dim to very dark depending on the aperture setting.   There is a flash tube on either side of the lens in grey painted cylinders, the lens assembly and front of the bellows appear to be coated in the same grey paint.  The flash lenses were not well masked when built, there are spots of paint on them.  There are wires soldered to the hot shoe on top that lead into the base.  Several places on the camera have hand-painted spots calling out controls, and there's some plastic hacked away to allow easier access to the film rewind button.

The camera, bellows and flash tubes are mounted to a roughly cast platform connected to an aluminum hobbyist project box by a pistol grip.  There's a mount for a cable release in the pistol grip.  The box has a switch, a hole with a small neon tube and a rectangular light, plus an assortment of typed paper labels. On the front is a Photo Ease MFG logo that appears to have been cut from letterhead paper, complete with a phone number starting with YU-2. (elsewhere that's YUkon-2.  The address currently houses a small copy shop in New York City.

Power cord is to the rear, the bottom has a grey PVC bottom held by 6 sheet metal screws.  Under that cover is a tangle of wires and components wrapped in paper masking tape.  The ground wire is just jammed into a corner of the box, held by the plastic bottom.  I'm guessing not UL listed... 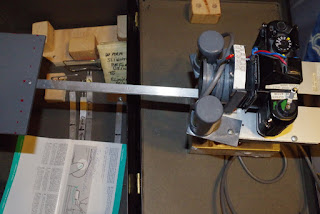 The camera came with a fairly flimsy fiberboard case
with some bare wood blocks attached, and an assortment of rods.  Most of the rods have a frame at the end with dots of paint near the corners to indicate the picture area, one has a platform.  According to the instructions most of the frames are placed even with the part you are trying to photograph.  This will push the camera back on the bellows  by the proper amount to focus at the appropriate distance for that attachment.  Each rod has a large and small number depending on which of the two allowed film types you are using. 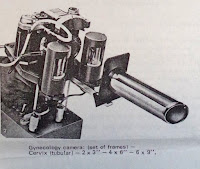 The instructions have one page with professional looking (if old-fashioned) typeset, line drawings and photos showing different cameras and an additional 3 pages of instructions that appear to be typed on a manual typewriter, with xx'd out words and handwritten corrections in blue ink.  One of the photographed cameras appears to be a Russian Zenit.  Zenit-based cameras were among the cheapest and most primitive SLRs available in USA in the 60's and 70's.  The other camera in the photos appears to be a Wirgin Edixa with a waist level finder.  The Edixa series ended in 1968, and Wirgin went out of business in the early 70's.  There isn't much detail in the line drawings, but they appear to represent an Exakta or more likely the budget version Exa.  The instructions show versions for dental work, plastic surgery and dermatology, pathology,  "eye camera", a copy stand, and a gynecology camera with a similar set of frames for 2x3", 4x6", 6x9" and "Cervix (Tubular)" attachments.   I think the gynecological version explains the Edixa--In its time it was likely the least expensive SLR with a waist level finder available, so the photographer would not have to put their eye right against the camera while photographing a cervix.  On the other hand with the dim viewfinder I'm not sure if they could see anything anyhow.  (I'm also guessing that any patient who saw how this was wired and the difficulty in sterilizing would refuse...) 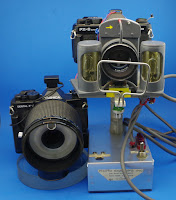 By this time Yashica had introduced the Dental Eye for many of the same purposes, even using the same camera body as a base.   The Dental Eye was a much more refined camera.  All the specialty parts including flash are inside an oversized lens barrel, there are no rods or frames, and focusing sets the aperture.

Information relating to the Photo Eaze camera is a bit hard to find, compounded by "eaze" being far more common as the name of a marijuana delivery service and a sexual lubricant.   I've found a few pictures with Edixa and Kalimar/Zenit bodies, and one with a Pentax K1000 body.  One source with a Kalimar bodied version from 1982 showed an invoice for $399. The only picture with a Yashica body I've found so far is the eBay auction I bought mine from.   If anyone reading this has information I've left out, please leave a comment.
Posted by Sevesteen at 10:09 PM No comments: