She did it on purpose

We took the dogs to St Mary's lake, in part to get out, and in part to scope out the location of my probable new job.

In the first 5 minutes, Bella found something slimy and smelly to smear on her head. I threw a stick in the lake and got her to rinse most of it off, but the residue was still unpleasant, necessitating a bath when we got home. While we were at it, we bathed Angie.

Both dogs will shake all over the house, so we pretty much have to mop up after them. Trying to avoid that, I herded them outside. Angie decided that while still wet from her bath was a perfect time to dig a hole, and then track the resulting mud through the house.

So much for not having to mop...
Posted by Sevesteen at 11:39 PM No comments:

Yesterday I ate dinner on the deck.

The anti-bug Tiki torches were empty, neither one would light. I refilled and lit them, then went to bring my dinner from the kitchen.

I was carrying a plate of ribs, a bowl of hot beans, and a cup of hot barbecue sauce to dip the beans in. As I stepped down on the deck, something hot sloshed on my wrist, and I dropped the bowl and cup. In hurrying to get cold water on my wrist, I tossed the plate with the ribs. (My wrist is OK)

When I came back to the deck to clean up my mess, one of the tiki torches was entirely engulfed in flames, and the plastic part of the torch that holds the fuel had melted. I tried to smother this by putting a can over it, I finally had to get a wet towel. Apparently I hadn't dried the fuel off the bottle well enough and the outside caught.

And then I slipped where the beans spilled.
Posted by Sevesteen at 2:03 PM 5 comments: 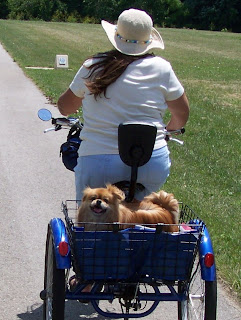 We were dog-sitting Mom's dog Sammy. He's a bit small to run with the big dogs, so he rode from stop to stop.
Posted by Sevesteen at 9:54 AM No comments:

Labels: dogs
Newer Posts Older Posts Home
Subscribe to: Posts (Atom)
I am a card-carrying libertarian, interested in guns, old watches, old Japanese motorcycles, books and politics. I like to debate--feel free to comment even (or especially) if you disagree with me.