Earlier this month, an Ohio carry license holder was attacked at a gas station about 25 miles from me, with one primary attacker and the attacker's friend running in to help.  Based on the victim's account, backed up by surveillance video, the attacker greeted the victim by someone else's name, demanded a ride and tried to pull him out of the car when the victim tried to leave.  Victim had left his gun in the center console, managed to retrieve it and fired two shots, then left and dialed 911.   Last I saw, the attacker was in the hospital expected to recover.

Both the victim and the attacker's friend have posted about the incident, the victim posting on the Ohioans for Concealed Carry forums, the accomplice on Facebook.  The accomplice's version doesn't quite match up with either the victim or the surveillance video--and his speed in running away doesn't match up with his tough-guy front, either.

'It was just crazy though, cus Brandon was beatin dude's ass & his pussy ass pulled a gun a shot em..  It was nuts I swear, I don't 4 get a face though, he knows what it is"

(H/T and link to gunguynextdoor, who has a friend saving screenshots even after the Facebook went private)
Posted by Sevesteen at 10:14 AM 1 comment:

What do you expect 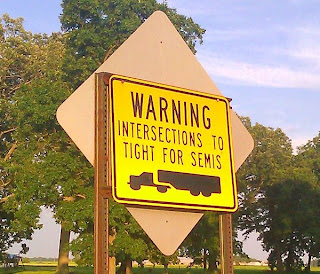 The town this was in is pronounced Roo-she, spelled Russia, so I guess I shouldn't expect too much.
Posted by Sevesteen at 10:10 AM 2 comments:

Spotted wandering around the neighborhood 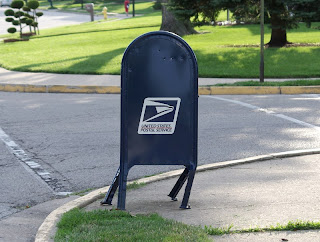 'I've had enough of people stuffing me full of junkmail, I'm outta here...."
Posted by Sevesteen at 10:38 PM 2 comments:

The Daily Show on the ATF's Fast and Furious

For the few readers unaware, the ATF had a harebrained scheme to assist Mexican criminals in buying guns from American dealers...for some reason that still isn't clear, and without the knowledge of the Mexican government.   The scandal broke when American Border Patrol agent Brian Terry was murdered with one of these guns.

(Note--removed the video because it had switched to autoplay)

Some gun rights supporters believe that the goal was to create a problem that could be 'solved' with more ATF funding and power.   I'm not sure I believe that, but I'm not sure I don't, either.
Posted by Sevesteen at 12:55 AM No comments:

Harley parts on a Honda 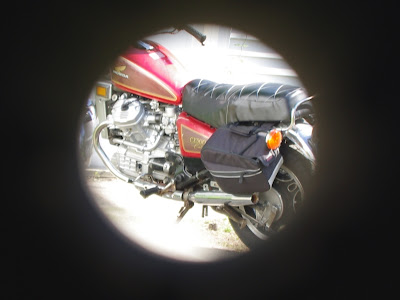 This isn't a fancy Photoshop trick, it is a view through  one of the old mufflers from my motorcycle. (click to enlarge).  I wans't particularly happy with the mufflers that came with the bike, because as you might guess they were rather loud.  According to the Honda CX forum, most Harley mufflers would fit my CX, although modification of brackets may be necessary.  Apparently some Dyna mufflers fit with no modifications.   Most Harleys don't come from the factory all that loud, but because many Harley riders believe that Loud Pipes Save Lives, there are lots of new and nearly new Harley mufflers available cheap.

Yesterday I found a pair at a garage sale for $10.  They were from a Fat Boy rather than a Dyna, but getting the brackets to work wasn't all that bad.  A huge reduction in sound, and a lot more pleasant to ride.  No significant change in power.
I also fixed my trip odometer--the middle digit wasn't resetting properly, and there was a screw loose inside the spedometer.  Getting the odometer working was fairly easy--the difficulties were in getting to it, and then getting the oil out from the places it shouldn't have been.  If I ever do that again, I'll wrap the rest of the speedometer assembly in towels or something, to minimize oil getting where it shouldn't be.
Posted by Sevesteen at 8:02 PM No comments:

We had a Catholic church festival this weekend, complete with loud music and a beer truck.  I rarely park in our driveway, but during festival weekend it is usually the only option within a couple blocks.

Last night near the end of the festival I was working in my garage, and heard the neighbor across the alley talking to police.  I went to be nosy investigate, found that some unknown person had parked across the neighbor's garage door.  Caprice station wagon with actual expensive wire wheels (not just wire hubcaps) with a window down and a Blackberry and what looked like an iPod tOuch plugged in to the lighter socket. 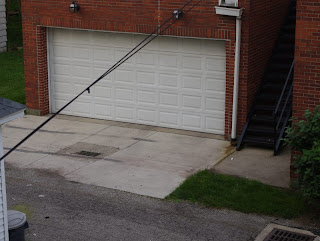 It took some time to get the police and a tow truck--but more than 2 hours after the festival closed, the owner had not come to claim his car.  2 of the 3 Stooges finally showed up with a tilting bed winch truck, but had problems because it was rear drive and the front wheels were cocked--it kept wanting to veer off the bed of the truck, they would reset the winch and pull it sideways, then up the truck another couple feet.   You can see the marks where the tires were dragged along the pavement-the car was parked parallel to the garage door, blocking the entire door.  Whoever parked there had to have pulled past, then backed in, so this wasn't just accidentally blocking a driveway.

I'm really curious what was going on here--A very odd place to park even considering the circumstances,  odd that hours after the end of the festival the driver still had not claimed his car.  Odd that a decent cellphone and ipod were left in plain sight, with an open window.  Apparently the owner didn't have a license.
Posted by Sevesteen at 7:18 PM No comments: 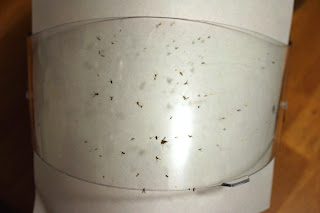 I went for a short motorcycle ride this evening, shortened drastically by bugs.  I cleaned my face shield before the ride, this is after less than 15 miles.   From the sound they made when they hit, I think some of the bugs were made of rock.
Posted by Sevesteen at 10:16 PM 3 comments:

The seat my Honda CX500 came with looked like this when I got it, except with black tape wrapped around the back.   Not only damaged, but uncomfortable for someone my size--I needed to slide back a few inches, but the hump between the driver's and passenger section prevented me.  I re-shaped the seat with a bread knife, and added a bit more padding to the front section. 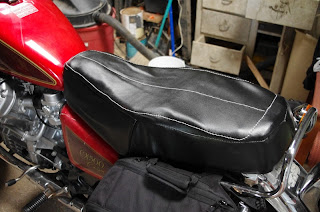 The first attempt at a cover looked awful, barely better than what was there before--but it was a good bit more comfortable to ride. 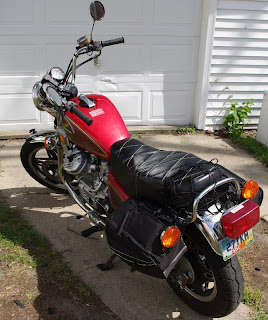 The final version turned out quite a bit better.  For the top I used 2 layers of marine vinyl with quilt batting between. I was originally going to sew ribs, but the back of the vinyl had this diamond pattern in it, so I sewed along that pattern.  It needs to be touched up in a few spots--I've got a pucker that I need to tear out and re-sew, and 2 spots where a second line of stitching will close a gap.  However, it is no longer the worst part of the bike,  so I'll probably leave it for now.
Posted by Sevesteen at 12:43 PM 1 comment: