"He earned thirty-eight dollars a month plus allowances. A really good pair of leather boots cost fifty dollars. But an affordable pair of boots, which were sort of OK for a season or two and then leaked like hell when the cardboard gave out, cost about ten dollars. Those were the kind of boots Vimes always bought, and wore until the soles were so thin that he could tell where he was in Ankh-Morpork on a foggy night by the feel of the cobbles.
But the thing was that good boots lasted for years and years. A man who could afford fifty dollars had a pair of boots that'd still be keeping his feet dry in ten years' time, while the poor man who could only afford cheap boots would have spent a hundred dollars on boots in the same time and would still have wet feet."   (Men at Arms, Terry Pratchett)

Years ago, I had a sole of a pair of sandals come unglued at the toe, leaving the sole flapping.   I found a replacement pair. I thought to myself "At least ths sole is sewn on to these, they should last a long time".   I was wrong on both counts.  When that sole came loose I found out that the stitching was just decorative and didn't attach anything.  As I got older i learned that a non-sneaker shoe over $100 was far more likely to last more than a year, but I still had some trouble telling the difference between $100 worth of durability and a $50 shoe with $50 worth of fashionable brand name tacked on.  A few months ago Youtube suggested a video by Bedo's Leatherworks where he recrafts shoes as he explains, and I learned the difference between stitched on and cemented soles.

A leather Goodyear Welt is the traditional American construction.  A strip of leather (the welt) is stitched to the uppers and insole, then the midsole and usually the outsole is stitched to the welt.  Bulkier and stiffer than most other methods, but durable and easy to re-sole.  The construction leaves a cavity in the shoe between the insole and midsole that needs to be filled, often with cork or foam.  If care is taken while recrafting the welt can be re-used through multiple resoles, and the welt can usually be replaced.  (Click to enlarge the pictures--and my blog reader is mangling the layout, you may want to read this directly on Blogger)

A couple of generations  ago Goodyear welt was the normal construction for even mid grade shoes, now it is limited mostly to mid-grade or better work boots.  Dressier GYW shoes still exist but are relatively rare.  Not all GYW shoes are quality--in particular boots that advertise it as a feature often use a plastic welt that is likely to crack.     Pictured is a vintage GYW shoe with the outsole and midsole removed, showing construction details at the welt joint.  The upper picture shows the welt sewn through the upper, the lower picture is the same area from the bottom.  This particular shoe has Poron sheet foam filler, better shoes would generally have cork or leather. 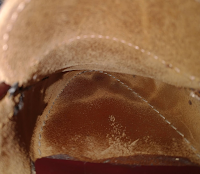 Blake Stitch is relatively simple in concept--the whole stack of insole, midsole and outsole is stitched straight through by a machine that can reach all the way into the toe.  Sleeker and more flexible than Goodyear Welt, may need less break in.  They can be re-soled, but not all cobblers have the machine to do it. They also can't be re-soled as many times--you can't re-use the holes, and when too many new holes have been made the leather will tear and there's no welt to replace.

Blake Rapid is sort of a hybrid between Blake and Goodyear welt.  Instead of a welt, the midsole is Blake stitched to the insole and upper, then the outsole (bottom layer) is stitched to the midsole .  Eliminates the direct path for water to wick.  It can be hard to tell the difference between Blake Rapid and Goodyear welt without disassembling the shoe 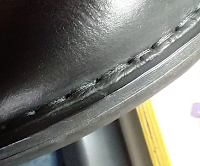 Stitch Down--The upper is folded outward, then stitched to the sole.  More common on boots, and especially chukka or Desert Boots.  This picture isn't entirely typical of stitch down, usually the upper leather will extend all the way to the edge of the sole rather than being inset like this one.

A few sneakers (mostly from non-athletic brands) use a cup sole sewn through the sidewall.  Born uses a similar construction on many of their shoes they call Opanka.  Many of the sneakers are at least technically resoleable, Born says their version isn't.

Most other sewn sole shoes are variations and combinations of the above...but sewn soles are a tiny percentage of all shoes, mostly in work boots where the durability is more important.  Most shoes are some sort of cement (glued) construction.

It turns out my floppy sandals were bondwelt, a form of cement construction that mimics the look of GYW.  Bondwelted shoes have a welt that is only decorative with stitching that is only decorative, the sole is held on with glue.  These often look tidier than a true GYW because it is easier to stitch in a straight line on a roll of flat welt than to follow the shape of the shoe with an upper in the way.
Shoes don't have to be sewn to be fairly durable--there are plenty of good non-sewn shoes that will  last until the sole wears through.  However, sewn-on soles are far more likely to be economically reasonable to resole or recraft, and with care can last through several recraftings.   I also object to fake details--If there's a welt I want it to be real, if there are stitches I want them to do something.
Posted by Sevesteen at 8:37 PM No comments: