I'm still going back and forth to middle-of-nowhere Pennsylvania for work. The travel is already old, but the money is good. Stopped at a rest stop on I-80, and heard gunfire--Spaced out with a second or two between shots, rather than gunfight or Hollywood rate of fire. I thought "must be a gun range behind those woods...wonder how often it freaks out the tourists" A couple minutes later, I overheard an older looking guy on his cellphone calling 911 to tell them about the gunfire. A worker at the rest stop was walking by and told him there is a range behind the woods. There were only a couple of vehicles in the parking lot, and I'm pretty sure his was the one with New Jersey plates...
Posted by Sevesteen at 11:33 PM 2 comments:

I spent the weekend before last in New York City with my daughter, who is living in Harlem. My first trip to NY--quite interesting, since I've never lived in a city over 30,000 population.

The Apollo theater is unimpressive from the outside.

There is apparently a chain of street vendors that sell incense and Shea Butter--nearly identical tables on several successive blocks. Every other table was Michael Jackson merchandise. There are a bunch of vendors near Times Square openly selling watches that if real would be thousands each. I didn't check prices , but I would expect a lot more security on a case with over $500,000 in merchandise.

Lots and lots of signs announcing rules and penalties that everyone ignores.

Didn't have a problem parking near my daughter's place, but when I'd go to get something out of the car, people would ask if I was leaving. Lots of storefront churches on her block. On Sunday morning, there were double parked cars all up and down her street.

I'm not used to seeing homeless people, flamboyantly gay people, or flamboyantly gay homeless. One of the places we went by was the neighborhood of the Stonewall Inn, where all three were present.

I kept forgetting to bring my camera when we were going to photogenic places..
Posted by Sevesteen at 10:12 PM 6 comments:

Alpheca is a gunblogger who is also a car salesman. Recently he had a guy turned down when trying to get a loan--Not because he was a poor credit risk, but because he was on the Terrorist watch list.

What pisses me off about this is that the reaction to terrorism brings us closer to the kind of government that they want us to have.

I'm fine with eliminating techicalities for real terrorists--Forget to read their Miranda rights, if they are still proven to be a terrorist, they still get the consequences. What needs to stop is the ability of the government to delcare someone a 'potential terrorist' with all sorts of attached rights violations, without any duty to prove it. Without limits, the list essentially covers all of us--If you don't properly bow to the most corrupt government official with the ability to add to the list, what prevents him from putting you on the watch list out of nothing but spite?
Posted by Sevesteen at 5:49 PM 2 comments:

Pictures through a windshield 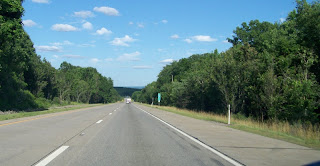 I'm in Pennsylvania/NY training for my new job. Even though I lived in West Virginia for a couple years as a child, the hills of this part of the country are amazingly beautiful. (Click to make bigger) 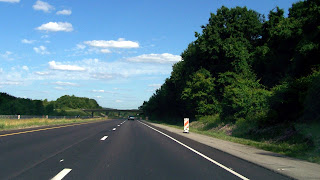 This was just after a sign announcing the highest spot east of the mississippi river on this particular interstate. 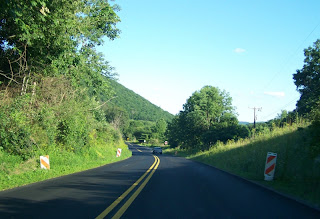 The beginning of an ear-popping descent into a valley. 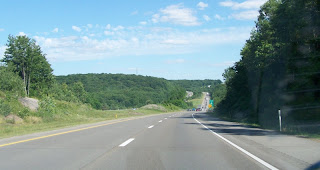 ...or was this the highest? I lost track 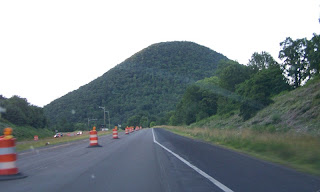 A road cut visible from the plant parking lot. Not so impressive until you realize that the thing just to the left of the sign is a full sized semi: 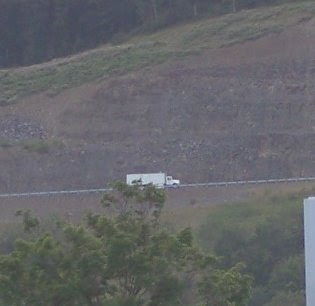 I just got an iPod touch as a replacement for my PDA--not so much to play music, but more to check mail, read blogs and keep track of phone numbers and such.

So far, I'm very impressed with the iPod--the touchscreen keyboard works better than I'd expect, the interface is fantastic, and Safari is a much, much better browser than either Windows Mobile (an old version) or the one on my Palm T/X. The Stanza Ebook reader (a free download) is very nice. The ability to watch youtube is also a plus, although it would be nice if it were generic video rather than just youtube.

iTunes, on the other hand..well, since my Mom reads here, I can't give my full opionion, but "sucks" is the edited version. I can understand complexity in dealing with DRM, but I'm not--I should be able to treat the iPod as a thumb drive, and just dump MP3's into the proper folder. Instead, itUnes has to process them in a couple of passes before they can transfer.

...and using a separate Windows user account on my wife's computer still brings up her songs and such. By holding the shift when you launch, you can choose which existing user's ituneS to connect to, or create a new user but this should be the default on a separate user account. It appears that itunEs objects to being used with two computers--When I decided to try on my wife's box after giving up on the crappy computer I've got Windows on, it gave me the option to erase the ipod and start over, or do nothing.

...and apparently they have changed how iPods work enough that Linux hasn't caught up yet.
Posted by Sevesteen at 5:03 PM 2 comments:

Labels: computers
Newer Posts Older Posts Home
Subscribe to: Posts (Atom)
I am a card-carrying libertarian, interested in guns, old watches, old Japanese motorcycles, books and politics. I like to debate--feel free to comment even (or especially) if you disagree with me.