“How do you defeat a karate master? Offer him as many small coins as you can shove into a hat before he says “stop”. Of course, to get the money, he must catch the hat – with his head, as you drop it from the fifth floor.”
...To a libertarian, every new statist restriction is similar to a coin from this joke"


RTWT.    This is a concept I've been trying to articulate, he does a better job than I've been able to manage.     Each law passed adds a coin.  The "coin" may have varying monetary values--this is the beneficial part.  But each law/coin also has a weight--the restrictions it puts on us, the extra power given to government officials--in some cases making it impractically difficult to follow the whole law.  No matter how small or trivial each individual weight is, enough will crush us.


Some laws are well worth the weight--the value of laws against murder, assault, theft and fraud are far greater than the restrictions they add.


Some are not--what good purpose is served by licensing criteria for hairdressers beyond basic sanitation?  (or even licensing them at all?)  Does it make sense that thrift stores and garage sales can be held responsible for product recalls?

Posted by Sevesteen at 12:12 AM No comments:

Took my grandson to the Columbus zoo today--First time we have taken him that far, he did well--but he was exhausted by the time we left, asleep before we were out of the parking lot.  Click on pictures to make them huge 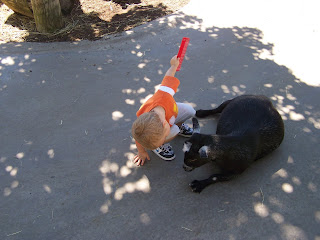 They have a bucket of combs and brushes at the petting area. 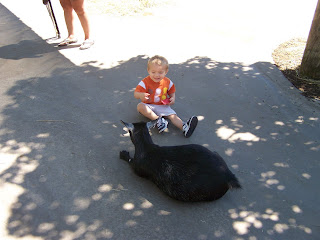 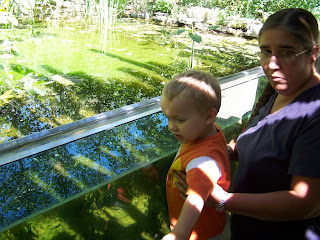 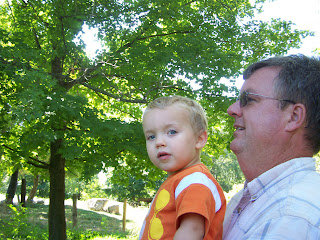 He wanted to get in and swim with the fish... 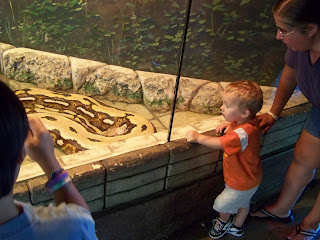 It is really hard to get a picture of a toddler at the zoo that shows faces and that he's at the zoo.  Sometimes you just settle for faces. 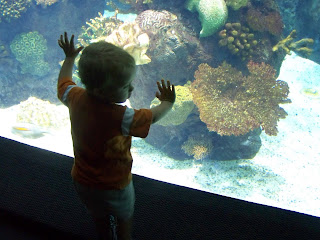 
Giant aquarium.  I think it is fantastic, he wasn't impressed. 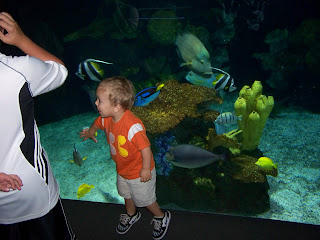 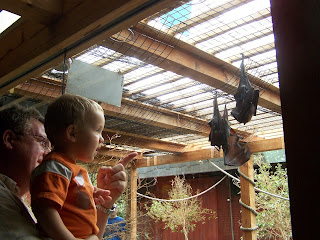 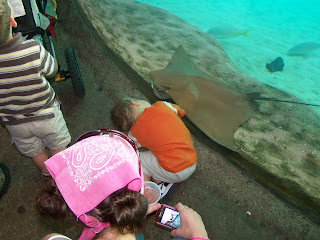 He did like the tank with manatees and rays. 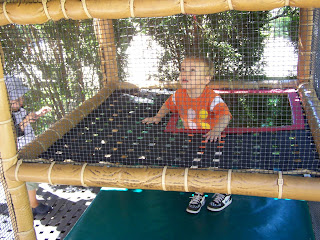 They had a fantastic playset, although I am not sure why it belongs at the zoo.  Kind of like the McDonalds ones, except much bigger and better.

The only downside was if your kid didn't want to come out, it was hard to get to him...

These were the "stairs" to the upper levels--a series of  steps like this, except with the hole in a different corner for each step--maximum fall level was only about 2 feet onto a stretched cloth floor. 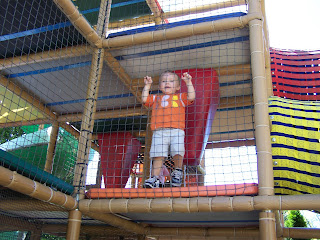 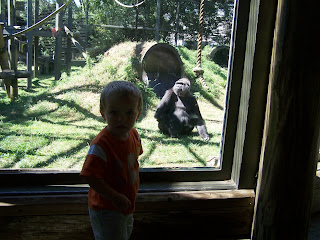 I am probably going to use this picture for a Gimp tutorial. 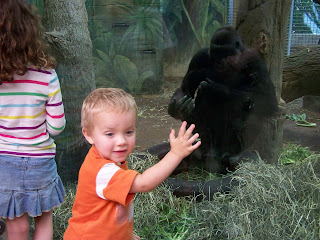 There is a lot about this song I usually would not like--particularly the NSFW language. In this case it works, and the song is catchy and funny.  I've listened a dozen or more times in the last 2 days

I moved one of my basil plants to the deck. It got a visitor: 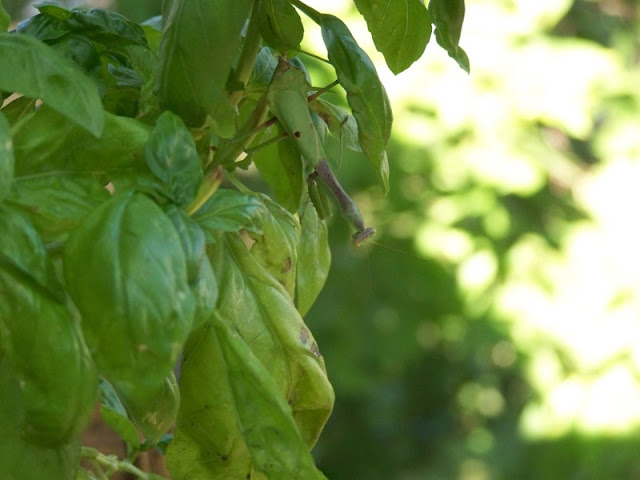 I didn't know preying mantises liked Italian...
Posted by Sevesteen at 10:28 AM No comments:

I wanted to upgrade my iPod Touch--despite it being barely over a year old, and being updated once in that time, the majority of apps I have tried to install in the last few months need a more recent version of the iPod OS.

It needs a Windows (or a Mac) computer to update, with enough space to make a copy of everything on my iPod--in this case, about 12 gigabytes. I have one computer left that can still boot into Windows, and it does have far more than 12 gigabytes free.

Except the iPod gives no choice in where that free space must be, it insists that it must be in the user's "my documents" folder, which is by default on the C drive. Windows makes it slightly difficult to install with 'my documents' anywhere but C, and even more difficult to move them after the install.

When I install Windows, I have been in the habit of partitioning the drive, with a small but adequate partition for the C drive, and the remainder as an E: drive for data. This means that if I have to reinstall, I can wipe Windows without wiping out the data.

There may be a workaround within iTunes, but I couldn't find it in the time I was willing to devote. There is a section within iTunes to enter a path, logic would lead one to believe changing that path would change where the backup would go--but when I changed it to a path with more than enough free space, it still tried to use the "my documents" on C: to put the backup.

I finally managed a workaround by adding a spare old hard drive I had available, shuffling data then using Linux to expand the partition holding the C drive--a project I had been meaning to do anyway. Once I did that, I was able to sync my iPod and run the update. I have no idea how long the update took, but at least several hours with the CPU running at 100% for most of the time, and virtually no indication of progress--usually a symptom of an application that has hung. I left it overnight and when I awoke, the upgrade had completed.

I am still amazed at how amazingly well Apple does some things, and how amazingly badly they do others. My brother is an advanced Mac user. He said that iTunes for Windows left such a bad impression, it kept him from giving Mac a serious chance for about a year.
Posted by Sevesteen at 11:36 PM No comments:

My wife and I both have EeePC 900 netbooks in addition to our main computers.  Being a geek, I was not happy with the version of Linux that came with the netbooks--it worked OK, but it appeared that little effort was spent on keeping things up to date.  The versions of applications used were old, particularly Firefox.

I went through a handful of netbook-specific versions of Linux.  The Eee 900 series has slightly odd audio hardware, and needs a modified kernel to get sound working just right.   I was also hoping to find a version that could do Skype video cleanly.  I finally settled on on Jolicloud beta. Jolicloud was meant to be a "cloud" based system--rather than relying on local data storage, it is meant to be on the web for almost all use.  Many of the official apps are slightly modified versions of web applications, with most of the browser controls removed.  Not perfect--the default method of installing applications was limited to apps that fit their philosophy, but since Jolicloud is a tweaked version of Ubuntu Netbook Remix, entering "sudo apt-get install synaptic" in a terminal gave me the full graphical installer from Ubuntu.

I was mostly satisfied--I had come to the conclusion that the hardware just wasn't strong enough to do Skype with video, but other than everything worked fairly well.

Unfortunately, the "upgrade" from the 0.9 beta to 1.0 was not an improvement.   Power management no longer worked, the interface was drastically different, many applications that I had installed had been removed, and the Chromium browser would not remember changed settings.  It also refuses to log in without a network connection.  I did a bit of checking on the internet, and found that this was by design.

So rather than fight with Jolicloud, I went back to Easy Peasy. I've got the Eee with a separate drive for my home folder--this means that while I have to reinstall some apps, I do not have to configure them.  For example, installing Pidgin then launching it automatically logs me on to the IM networks I had set up before.

In my view, there should not be major changes when going to a "stable" version--too much of a chance of introducing bugs that won't be caught.  It is also a bit of bait-and-switch for those who went through the beta versions and expected something similar in the stable.
Posted by Sevesteen at 11:43 PM No comments:

Phillip Greenspun is an electrical engineer and Internet guru.  He has had the same email address since 1976, and founded photo.net in 1993.   He now runs a flight school in the Boston area, in addition to teaching at MIT.  He talks about lobbying and big government:


Boston Red Sox, along with other professional sports teams, lobbied Congress and the FAA for years trying to get them to forbid banner-towing airplanes flying over stadiums during games. They did this in hopes of preventing anyone from advertising to fans other than themselves, thus enhancing their billions of dollars in revenue. The FAA refused to hand over airspace to private owners, but Congress forced them to do so after 9/11, arguing that a 3 nautical mile ban around stadiums was necessary for security. Because this taking of public property was done under the guise of security, it was sufficient to ban only banner towers; all aircraft were banned except for those owned or operated on behalf of the sports team. The security value of the ban is negligible. A terrorist in a jet would fly through the 3 n.m. ring in about 1 minute. There would be no time to evacuate the stadium. It isn’t even clear that there are procedures in place for FAA controllers to inform stadium owners that someone has violated this security zone and therefore there would be notification to fans that it was time to duck.

(click the quote to read the whole article) Three miles is nowhere near enough for any real security--even a very slow airplane could cover that in a minute and a half--what could be done in a minute and a half?   However, three miles covers most of Boston, meaning his flight school has to know the schedule and not run their helicopter tours when there are games--even if they will not overfly the stadium, even if the game is not on the printed schedule.   He also talks about the costs of his flight school vs. the costs of a degree-granting college.  His school is about half the price--but because of federal subsidies, it is cheaper to a student to get the same training at a college or university--because you and I pay the difference.

Went to the Ohioans for Concealed Carry picnic today.  It was the first time I've open carried other than at a gun range. Felt strange--my subconscious kept trying to tell me there was something wrong with my holster, I needed to fix it--kind of like having my fly open.   No soccer moms this year.

I got a couple of ideas for different holsters, and won a box of .380.  Speakers were OK, food was fair. Nikki Goeser was great for the first 20 minutes--I'm not going to tell her to shut up though, all things considered, she is doing well for herself and for gun rights.
Posted by Sevesteen at 12:09 AM 2 comments:

Labels: 2a
Newer Posts Older Posts Home
Subscribe to: Posts (Atom)
I am a card-carrying libertarian, interested in guns, old watches, old Japanese motorcycles, books and politics. I like to debate--feel free to comment even (or especially) if you disagree with me.