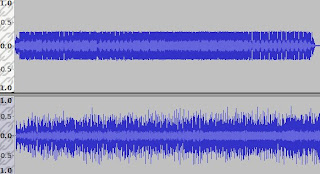 This is a visual representation of two songs--one is "Kid Charlemagne", a fairly fast paced, dense and intricate song, the other is "Ain't Nothing Wrong with That", a very funky song featuring heavy use of bass drum, and an electric pedal steel guitar.    If I had to describe the rhythm of 'aint' nothin' wrong..." in words, 'Whump' would almost have to be one of them.

You can see a drastic difference in how these songs show up visually--one of them is dense and smooth, the other has lots of variation.

...except 'Ain't Nothing Wrong with That" is the one on top that looks smooth and dense.   The difference isn't in the songs themselves, it is in how and when they were recorded, and illustrates a huge problem with music today, the Loudness War.

CD's and most other digital recording formats have a maximum peak volume that is impossible to exceed.   When a song is recorded or mixed, you can still increase the average volume by removing room for contrast, making every part of the song equally loud--however gone too far and the music will be muddy and indistinct.

Why would you do that?  Because when comparing songs, people tend to prefer the slightly louder one. It is possible to increase the average volume slightly without significant damage to the overall sound.   The problem here is that the competition has already done that, so you need to do it even more, then they do...until there's no dynamic range left, no contrast, no impact, and every part is as loud as every other part.   Some people say they prefer old vinyl albums to CD, that the vinyl sounds more natural.    It isn't that vinyl is better as a medium (it isn't) but that it doesn't allow this sort of abuse.

There is a good bit of new music that I sort of like...but the way it is recorded makes it unpleasant for me to listen to--the song has to stand out quite a bit before I'll put up with this hyper-compressed mushy-sounding recording.
Posted by Sevesteen at 4:00 PM