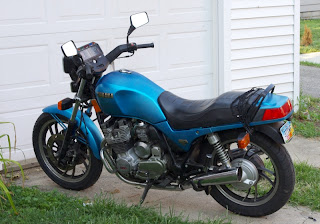 I finally got my 82 Yamaha 750 Seca running.  I bought it before the 81 Honda CX500 I've been riding, but it was a barn find and the carbs were gummed up from sitting a couple of years.

The bikes are completely different, both in mechanics and in riding.   The CX engine is a water-cooled 500cc v-twin with 4 valves per cylinder, operated by pushrods, originally rated at 52 horsepower and with the crankshaft running fore/aft   The Seca is an air-cooled 750cc inline 4, with 2 valves per cylinder operated by dual overhead cams, originally at 82 horsepower and the crankshaft running left/right.   Both bikes have shaft drive, both 5 speeds with front disks (dual disks on the Yamaha) and drum rear.

The Yamaha has more features, some very nice, some very silly 80's.   Nice features are the self-canceling turn signals that are based on time and distance--they stay on indefinitely when stopped, turn off after either a certain distance or time after moving, whichever comes first.  They also can be manually  turned off by pushing in on the switch.  I'm not familiar with modern bikes, but apparently this is still uncommonly good--other signals are either full manual or strictly time based. 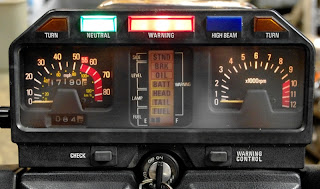 The instruments are 'very silly 80's'.  A big bulky rectangular dashboard, known by Seca fans as the Atari.  In addition to the standard lights and gauges found on most bikes, it has an LCD monitoring system that tells if the side stand is down, oil pressure, brake fluid or battery electrolyte is low,  headlight or taillight is burned out or fuel is low.   There is also a 4 segment fuel gauge, the one addition that is useful.
The LCD's are visible, but not attention getting--the attention part is handled by a big red light in the top center of the dash.  If any of the warning LCD's are on, the red light starts blinking .   Particularly annoying is the battery warning light--the sensors on these don't typically last 30 years, and won't work on all batteries, so every time I start the bike, I have to cancel the battery warning.   It is possible to bypass the unused sensor with a resistor--but my first attempt made things worse, as it would shut the monitor off only intermittently, and every time it came back, the warning light would blink again.    Apparently this is similar to how fuel works--but on my bike, reserve is at about 1/4 tank, and I haven't filled it up enough to get a feel for actual range.

The brake fluid monitor is required only because of the silly master cylinder location.  Rather than the usual practice of mounting the master cylinder at the brake lever and using a clear reservoir, the Seca has a cable-operated cylinder hidden between the fork legs.  Looks neat--but part of the reason for using hydraulics is to eliminate cables.  Feel is not as good as bikes I've tried with conventional brake setups.   The Yamaha also has anti-dive forks that are supposed to firm up the fork under braking, I haven't really noticed a difference here, and it is very likely that the system needs to be rebuilt.   The Yamaha also has silly rubber covers over the handlebars.

The riding position on the Seca is not terribly different than the CX, but more comfortable--This might just be a better seat.  Power is much smoother, and of course there is more of it.  The Honda is rated at 52hp, the Yamaha 82.   The Seca sounds like it is revving faster at a given speed in top gear, although the tach says it is a bit less--I'm guessing that what we gauge RPM by is the sound of the individual exhaust pulses, and more cylinders equals more pulses at a given RPM.   The Seca has a wider useful powerband than the CX.  The CX chugs if it is cruising below about 3000 rpm, or accelerating moderately below about 4000, and doesn't really make a lot of power below 5000.  The Seca doesn't seem to complain as long as it is above about 1500, and still has some acceleration this slow without having to downshift.   Both bikes have similar redlines--despite being a pushrod engine the Honda goes to 9650, where the Yamaha redline is at 9500.   The Seca engine feels kind of buzzy at interstate speeds.  The Seca seems to be a bit more stable, with less wander over pavement grooves and such.  This may be either tires or worn parts on the Honda--I rode the Yamaha about 20 miles on the original tires and it wasn't nearly as good.   The Seca still has stock mufflers, and they are very quiet at the rider's ears, especially at city speeds--Loafing along at around 30, it feels and sounds like a scooter with the majority of noise being gear or chain whine rather than exhaust.

I am not quite happy with the rear suspension on the Yamaha, large bumps like frost heaves are uncomfortable.  It does have both preload and damping adjustment, I haven't played much with either.  Preload was set to minimum, it is quite possible that with my weight I need a higher setting to prevent bottoming on large bumps.    My Honda is the other way around--the initial hit is less jarring, but the bike keeps bouncing a bit after.

The Yamaha has been poorly repainted--it looks nice from a distance, but not nearly as nice up close.
Posted by Sevesteen at 10:10 AM