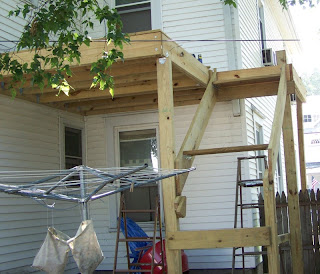 Got the hard part of the stairs done. I'm doing them in two pieces, since even 16 foot 2x12 isn't quite long enough. The upper halves needed just over 8 foot pieces, but because of the angles I was able to cut them both from a single 16 foot. I'm going to build the bottom half as a removable piece before I pour a pad.

My son came to help a bit--While I was trying to figure out what I was going to do next, he was horsing around with the footer hole I'd started and abandoned when I hit what appeared to be a solid layer of brick. He got past the bricks where I'd stopped, and it looks like it is just dirt the rest of the way down--I'd expected the same sort of rock piles I'd found in a couple of the other footers. That will let me move the corner post of the landing to where I wanted it in the first place, greatly simplifying the required bracing.

These stairs are as narrow and steep as code allows. They are wider and not as steep as the main stairs to the upper apartment.
Posted by Sevesteen at 10:25 PM