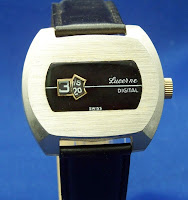 A jump-hour watch is one that has a dial like a calendar telling the hour. They have been around in various forms since the pocket watch era, although early models more often had a standard minute hand. It wasn't until the early 70's when electronic digital watches were introduced that the jump-hour "mechanical digital" watches became popular.

These were made with conventional tooling, without the investment necessary to switch to true electronic digitals The minute dial is mounted in place of the minute hand, and turns an hour ring during the last few minutes of every hour, with the same sort of mechanism as on calendar watches. Better jump hour watches would have an instant hour change. Some cheaper "mechanical digitals" had hours that moved continuously rather than jumping. Known as wandering hours, they were notoriously difficult to read quickly. 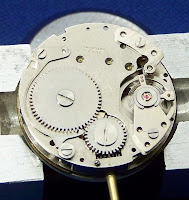 This is a Lucerne jump-hour digital from the 70's, with typical features of this style watch. Inexpensive, with a Roskopf pinlever movement. The Roskopf movement was the first mass-produced pinlever movment from the late 1800's, Similar in market position to the Timex, quality varied because the patents were long expired and the movements were made by many companies. Although Roskopf is often used interchangeably with pin lever, not all pin lever movements are Roskopf--A key feature of the Roskopf design is an over-sized mainspring that covers the center of the watch, requiring a modified method of running the hands. Although there were jeweled versions available, they typically used "advertising jewels" placed where they could get the count up to 17 the easiest, rather than where they would do the most good. These movements often have an extremely loud tick. Although I've seen quite a few Lucerne watches, I'm not sure if Lucerne is a real brand or not--I suspect it is like "Geneva", not eligible for trademark and used by many companies. It is generally on fairly cheap watches.
Posted by Sevesteen at 9:08 PM