The first LED watch was the Hamilton Pulsar in late 1971, with full production in 1972, retailing for well over $1000. This was an economic disaster for Hamilton--Most of the first versions were returned, and an entirely new module installed. The first LCD watches came out within a year, and not long after got backlights. It wasn't long before the price of LED watches dropped by 98% 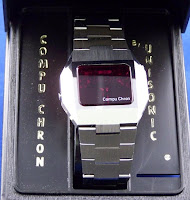 I found this one today at a flea market, with dead batteries, excellent condition, and including the manual. There was also a similar gold one. Really good price if all it needs is batteries, not great if it is actually broken. 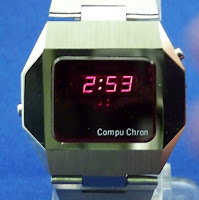 I took a chance, and with the installation of 2 new batteries, it works fine. Nearly new, with few signs of wear. The case says Compu Chron by Unisonic. The manual says Austin Watch Company. The module inside says Sanyo. 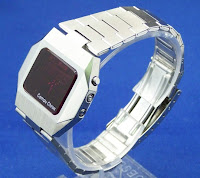 Posted by Sevesteen at 8:45 PM