Most mechanical watches that won't run are merely dirty, and need to be cleaned and re-oiled. There is a watchmaker near me who charges around $25 to clean and oil a watch--Absurdly cheap for the work involved, but still more than I pay for most of my watches. Out of budgetary necessity, I've learned to clean and lube watches myself.

This is more involved than the phrase "clean and oil" would suggest. It requires detail stripping the watch, removing around 80% or so of the parts including the mainspring and gear train, running most of the parts through a cleaning machine with 3 different sets of solutions, drying and finally reassembly and oiling. It takes me 60-90 minutes on a simple watch I am familiar with, where nothing goes wrong.

The jewels in a watch are synthetic ruby or sapphire, used as bearings. Most are pivot jewels that remain attached to larger pieces of the movement. These have a hole for a pivot, the axle part of a watch wheel. (The gears are typically called wheels in watch repair) Where even more precision is desired, cap jewels are added. This is required on the balance, somewhat useful but extremely difficult on the fork, and marginally useful on the escape wheel. The other wheels don't benefit from extra cap jewels. 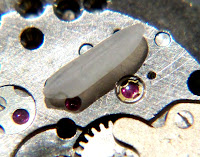 Cap jewels must be either ultrasonically cleaned, and then oiled with an automatic oiler, or they have to be disassembled for cleaning and oiling. The picture to the left shows a piece of uncooked rice next to a cap jewel. To remove this jewel, you need to carefully release the legs of the little gold spring from the notches they rest in. (Click the picture to zoom in) The spring will fold up, giving access to the cap jewel, and under that the pivot jewel. There are other types of spring that are not captive, so you have to be careful that when they are released they don't go flying somewhere.

Jewels are hard and slippery--Grab them too hard with your tweezers and they go shooting across the room. Don't grab them hard enough or straight enough and they fall out of the tweezers. This has been responsible for most of the watches that should have been repairable that I have failed to fix--the cap jewel for the balance goes missing. I've learned that the easiest way to remove them is with Rodico putty--a sticky putty that is designed to be low-residue, sold for watch repair. Replacement has to be done with tweezers. Cap jewels have a top and bottom, but it isn't apparent without magnification. Where a cap jewel is used, the pivot jewel is usually removable as well--This makes it easy to knock out of position when trying to reassemble. The pivot that rides in the jewel also gets in the way of reassembly.