The Dueber-Hampden company was one of the biggest pocket watch makers in America, but when the founder died, so did the spirit of the company. It struggled along until the late 1920's, when it was bought by the Soviet Union. The entire factory and a handful of workers were moved to Russia to jumpstart the Soviet watch industry. Apparently this factory became the "First Moscow Watch Factory", eventually taking the name Poljot. Shortly after the American workers came home, the Iron Curtain fell and contact with the Russians they were training was lost. Sekonda was a brand in the United Kingdom started in the mid 60's. They initially sold re-named Poljot watches, later watches from several of the Soviet factories. In the 90's, they lost all connection to Russia, and switched production to Asia. 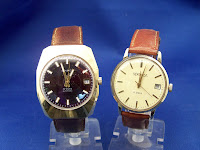 Seconda was a relatively inexpensive brand, although the examples I have are all decent fully jeweled movements. The purple faced watch here is gold plated automatic- they typically had a very thick plating, evidenced by the fact that despite the very sharp corners this watch shows no sign of brassing (Brassing is the watch geek term for worn-through plating, since most plated watches are brass) Russian Calendar watches are almost all instant change--Rather than the date slowly changing over the course of an hour or two, some time within a few minutes of midnight they snap to the next day in a fraction of a second. This is done with a spring mechanism that slowly cocks itself over a few hours. Unfortunately, these are generally only semi-quickset--In order to change the date, you need to set the time back about 4 hours, then forwards. This adds significantly to the wear of the cannon pinion, the part of the watch that lets the hands slip independently of the movement during setting. The cream watch came to me with a pinion loose enough that the hands would stop in the evening when it began to cock the calendar spring. The purple one feels light, but so far isn't slipping. Watches with "USSR" are generally ones meant for the export market, before the breakup of the Soviet Union. Home market watches from this era are generally marked CCCP, and watches after the breakup are marked "Russia". 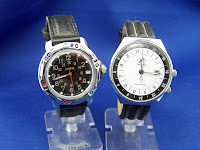 The black-dialed watch is a current export Vostok (Восток in Russian, meaning East) Russian watch, founded as an offshoot of the First Moscow Watch Company when it relocated to avoid capture during WWII. There are many dial variations, most with a military or KGB theme--'touristy' to my tastes. It is a manual wind, with a screw down crown. Unlike the gold plated Sekonda, the chrome on this watch is abysmally thin--The back is already missing chrome in large areas, even though this watch has only been worn a few weeks in total. The buckle was apparently made from recycled paperclips--It immediately broke, and I had to replace it. On the other hand, I bought the watch new for around $25 including shipping, dirt cheap for a mechanical watch. The white-dialed watch is a modern Dolphin true 24 hour automatic--the hour hand moves only once around per day. The date isn't typical Russian in its operation, but rather slow changing with quick set. The back uses a Rolex-style case tool to open. I am pretty sure that this is intentional, to make it more difficult to examine the movement--Although the dial says "Made in Russia" prominently, the movement is Chinese, based on Seiko principles rather than Soviet 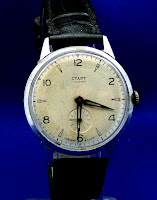 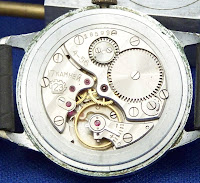