The first effective automatic wind system was the one used in the Rolex Oyster Perpetual. The Oyster Perpetual was revolutionary--One of the first, if not the first practical water resistant case, combined with the first practical automatic winding system. The original intent of the automatic wind wasn't primarily convenience but rather to maintain water-tightness--By eliminating the need for daily winding the screw-down crown would last longer, and there would be less chance of forgetting to tighten it. This also has the advantage of keeping the watch at a constant state of wind, reducing the potential for isochronal error. (Sorry, I don't own a Rolex to take pictures of, but there is an interesting and not very complimentary illustrated review here) 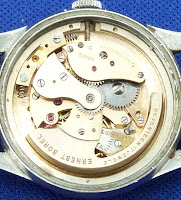 The Rolex patent covered a 360 degree rotating rotor. Watch companies that wanted automatic winding had to bypass this patent, and so they came up with the bumper wind automatic. The rotor (at the bottom of the movement, marked "seventeen jewels ERNEST BOREL) was set to be free to move in the most common positions, with a simple ratchet turning the center gear which runs through reduction gears to wind the mainspring. Bumpers (shown here in the upper left) restrained it from making a full revolution. Not tremendously different in basic concept, but less efficient than a rotor that can rotate 360 degrees. It does have the advantage of being a bit flatter than a 360 degree rotor. (Click pictures to enlarge) This particular movement was made between 1935 and 1945. Bumper winds continued for some time after the Rolex patents expired, with some models still produced in the 1950's. 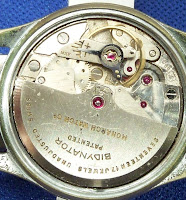 Like the bumper wind automatic, the Rolex only wound the watch when the rotor was turning in one direction. In the opposite direction, the system allows the rotor to spin freely. In 1942, the Bidynator was introduced, the first automatic that wound the watch with either direction of the rotor. The bidirectional design means it can stay wound with less arm movement. Note that this watch clearly uses a jewel for the rotor bearing, but remains marked "17 jewels". This means at least one of the standard jewels in the timekeeping section is missing. 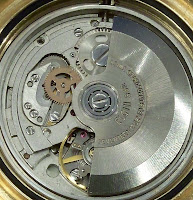 Both the Rolex and the Bidynator used a simple post arrangement for the rotor. Rolex still uses a somewhat fragile jeweled post, one of the weaknesses of their design. Eterna was responsible for the next major innovation, a ball bearing rotor in 1948, on the Eternamatic. The Eterna version used 5 ball bearings, and Eterna took this as their trademark. This was another increase in efficiency and durability, and eventually became the standard on most automatics. Shown is an AS 1996, made long after the Eterna patents expired. 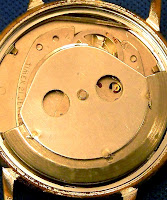 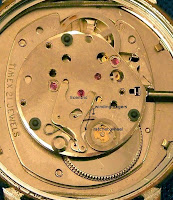 In the early 50's, Timex designed a low-cost automatic based on their existing pinlever movement. It used an eccentric cam on the rotor that moved a lever arm back and forth. (Right hand picture is of the same movement, with the rotor removed) The lever had fingers on the other end that engaged a ratchet on each direction, turning an axle which turns a planetary reduction gear, in turn winding the mainspring. Note that this particular movement is the jeweled version, with the unusal D-shaped jewel pins visible in the hole about 1/3 from the top, and 2/3 to the right. 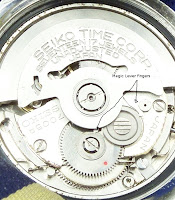 In the late 50's, Seiko introduced their magic lever automatic system--Similar in concept to the Timex system, but greatly simplified. The 4 piece finger system is reduced to a single flexible arm. The diameter of the ratchet wheel is increased, with a simple pinion rather than the planetary reduction of the Timex. The original versions used an eccentric cam on the rotor similar to the Timex. On the 7000 series movements (a 1970 7005 shown), the eccentric is moved off the rotor to a separate gear. Although this appears to increase complexity, it allowed Seiko to eliminate a separate bridge for the automatic wind system, making the movement thinner without affecting durability. Another simplification on most Seiko automatics is the lack of a hand-wind capability, with these parts often modified to adjust the calendar instead.

A teardown of a 7005 movement, with better pictures describing the magic fingers is here.

A teardown of a Swatch automatic, using the same system as most modern Swiss automatics is here.
Posted by Sevesteen at 8:27 PM