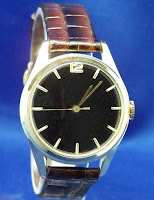 This is most likely from the 60's or early 70's. It has an aluminum case, although at least this one has a stainless steel back. Inside is a cheap pinlever movement. The dial is printed paper. More than likely this watch was given away as a prize rather than sold.

Aluminum cases were not successful in their original versions--The aluminum was soft, and the protective coating would scratch easily. This would let the aluminum pit badly, even worse than plated brass.

This particular watch is an interesting variation on the "mystery dial" watch. Mystery dial watches use disks with pointers instead of hands, giving the illusion that the pointers are floating. The most common type has conventional hour and minute hands, and uses a disk for seconds, often with an animal or vehicle "running" around the perimeter of the dial.

This watch also uses a disk, but for a different purpose--It retains the seconds hand, and the disk is polarized. There is another polarized disk covering the dial. When the disks are oriented so the polarization crosses, the dial appears black, as this .

When the polarized disks align, the logo under the bottom disk appears: 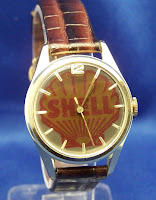 So using 60's or earlier technology, they were able to make a watch with a disappearing and reappearing face, cheap enough to be a givaway.
Posted by Sevesteen at 12:10 AM