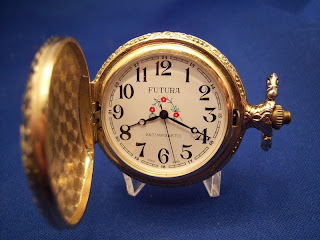 Stopped by the thrift store and found a pocket watch. Was not running, but the stem felt like a handwind, and I have never seen a quartz marked "antimagnetic". Center seconds means it is more than likely a wristwatch movement in a pocket watch case, and probably a cheap one at that. Not something I particularly want in my collection, but more than likely I can get it running with a few drops of oil and make a small profit on Ebay. 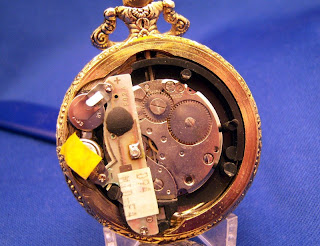 When I opened it up, I found that it was indeed the cheap pinlever wristwatch movement I expected, but I also found a little circuit board, batteries, and a piezo speaker on the case back, a strange combination.

It turns out that with fresh batteries, it plays Greensleeves when opened.

There can only be a few years in the late 70's or very early 80's where this made any sense--any earlier and the electronics would be either unavailable or expensive, and much later and all the cheap wind up movements were replaced by quartz.
Posted by Sevesteen at 9:58 PM