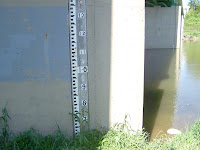 I brought the camera while walking the dogs, hoping to get pictures of the baby ducks and geese we have seen every day for the past few days.  None of them showed up that day, but the next day when we didn't have the camera they were back.... 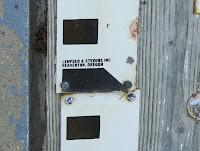 We often pass this river level marker on a bridge.  I'd wondered if Leopold was the same one as the scope and optics manufacturer.  It turns out that Leopold started as a company that repaired surveying equipment, Stevens contracted with them to manufacture a water level indicator he had designed, and only much later did they start doing scopes. 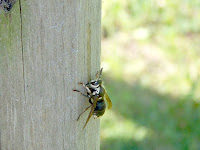 While waiting for Bella to catch up, saw this hornet-like bug cutting a groove in a wooden fence post.

And in other news, allergies somehow made me lose my good glasses, the only pair of bifocals I own.  My eyes have been getting abnormally itchy at night, and I wound up going to sleep on my recliner relatively early, not so much because I was tired, but because my eyes felt better closed.   Oralia woke me to go to bed.  In the morning when I got up, my glasses were not in their usual spot by my bed, and even with a spare pare, they are not in any logical place I can think of--I've searched all around my bed, my desk, the bathroom, the kitchen and the recliner (even inside the recliner) and come up empty.   It took a couple weeks to get used to my bifocals, but now  I miss them, I'm back to taking my glasses off for close work.
Posted by Sevesteen at 11:24 PM