As a fairly young child I was interested in photography.  My parents had an Instamatic--I remember it clearly enough that I was able to figure out it was a Model 100, with pop-up flashbulb holder.  (Later cameras used cubes)

When we lived in Kentucky in the early 70's I got my own 126 Instamatic camera.  I don't remember it as clearly, but it was a lesser version using more plastic.  I think mine took Magicubes--these did not require a battery, instead they were fired via a tab rising from the body of the camera.  I loved taking pictures, but had to pay for my own film and processing so didn't take many.

When I was in high school around 1979 or 80, I became interested in photography again.   At first I borrowed a camera from the yearbook, a relatively recent Yashica, with manual exposure via LED in the viewfinder.  None of the yearbook staff were Sophomores, (the first year at my high school) so there were few pictures of sophomores--many of my pictures made the yearbook. 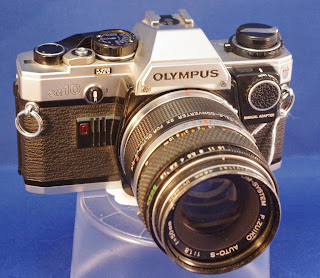 I started saving money, and when I had enough bought an Olympus OM-10, a 2x Teleconverter and a manual adapter.   The OM-10 is an aperture priority automatic, somewhat smaller than the usual SLR of the era. Shutter speed display via LED dots in the viewfinder.  I picked the Olympus because that combination was the least expensive name brand camera with both auto exposure and manual shutter speeds.  Serious photographers had to have manual shutter speeds.   Serious photographers didn't use teleconverters, but high school kids on a budget did...  I carried that camera through high school, taking pictures for the yearbook and school newspaper.  I eventually lost the manual adapter and didn't replace it,  and finally lost the camera when I was in Air Force tech school.

At around the same time I bought the camera, I wound up buying an enlarger and accessories at an estate auction and setting up a darkroom in a basement room.   The auction included various expired chemicals and paper, some of the paper had expired 30 or 40 years prior--I had some fun with those, but they were pretty fogged and couldn't get much of an image.  The enlarger was also very old and meant for medium format, not 35mm.  I had to modify a film carrier and raise the rails to get reasonable sized enlargements.   I bought film in 100 foot rolls and re-rolled into my own cassettes--If I remember right I could shoot a 36 exposure roll of Tri X, develop the film and print a contact sheet for around a dollar.  I didn't have the setup to develop or print my own color--I did it a couple of times at either the high school darkroom or the college where Dad taught so I shout mostly black and white.  I disliked flash (since I didn't own one...) so shot mostly Tri X, often pushing it a couple stops to 1600 instead of the rated 400.

The camera in the picture is a replacement that I bought via Ebay.  If you are in the market for an OM-10 get one with the manual adapter.  A bit less common, but no real price difference--and if you don't want the adapter you can likely sell it separately to someone else for about the cost of an OM10 body.
Posted by Sevesteen at 11:31 PM