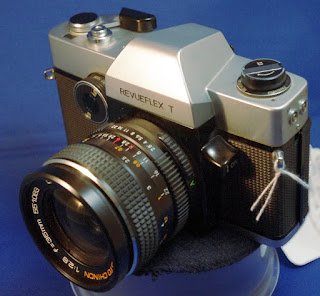 Revue was a brand sold by the German photo giant Foto-Quelle  (Google translates as Foto Source).  Cosina is a Japanese company known for building cameras to be sold under other brand names, both private label like Revue and for other makers like Nikon and Olympus.

The Revueflex T is a variation of the Cosina SLR (with SLR being the model name, not just a description).  As best I can tell, this was introduced around 1971--one source puts the original SLR model at 1968.   Universal M42 screw mount with stop down metering, Copal Square type vertical metal shutter with 1/125 sync speed.  Appears to have also been sold as the Carena 1000, a house brand of Photo Porst, another large German  photo retailer.  A very similar camera was sold as the Vivitar 220/SL with similar features and layout, except the shutter speed was on the top.   Vivitar is a distributor only, not a manufacturer.

Chinon, Cosina and Ricoh all made a number of cameras with this basic layout--shutter speed dial on the front rather than top and a vertical metal focal plane shutter. These shutters were made by Copal as drop in units, simplifying the camera design, but also dictating the control layout.  The Copal Square was an extremely durable shutter especially when de-rated to a max speed of 1/1000--most were capable of 1/2000.   (Ricoh made some models derated to 1/500--probably an artificial limitation for the cheaper model)

Other than the metal shutter, not a particularly noteworthy camera, but representative of the many cameras of smaller makers that copied the Pentax Spotmatic format.  However because of the name Cosina SLR a difficult one to track down (As if Ford had a model called Truck)--I tried to figure out the OEM model that matched this and originally failed--the closest match was the Vivitar 220/SL.  I stumbled across the picture above on a page of Google Images searching for Vivitar Cosina, and when I looked at the source page I found the specification matched my camera, and the differences were limited to trim.    While the source page had both the Vivitar and the Cosina SLR it didn't note the similarities, nor did it mention the Revueflex.
Posted by Sevesteen at 9:00 AM