The big story is that I'm down from an estimated 265 pounds in early August (257 when I bought my scale) to under 210 pounds--more than 50 pounds in less than 4  months.   I've gone from obese to merely overweight.  The Eat to Live diet has been much easier to follow than I expected.  I'm not any hungrier than before the plan, and while there are foods I miss, no difficult cravings.

My breakfast started out as oatmeal with banana.  Now I almost always have a large fruit smoothie--mixed frozen fruit briefly microwaved but not thawed, a ripe banana and 4-6 oz of unsweetened almond milk.  This winds up about a pound total of fruit, or 24 ounces liquid with the almond milk.   I'm not hungry first thing, so I take this to work in a thermos.    If bananas get ripe faster than I can use them I freeze the excess on their last useful day and use them with a few seconds more in the microwave.   If part of the frozen fruit is berries, blend them first with the almond milk to break up the hard bits, then add the remainder of the other fruit.  Thermos should be dry, otherwise you wind up with little bits of ice.  Fruit is on the unlimited list, oatmeal is a whole grain, supposed to be limited to one serving a day--plus I like the fruit better.  Often I'll add cocoa, vanilla and another banana (reducing the other fruit and not microwaving if the bananas are room temp).

On the weekends I cook a large batch of something and divide that into single serving deli containers for lunch and occasional dinner through the next few weeks.  Also on weekends I try to experiment a bit, trying something new before I put it in my work lunch.  Alton Brown's Winter Soup is really good, but because it is time consuming I make a double batch.

For lunch at work I rotate chili (usually twice a week--same as before the diet, with mushrooms instead of meat) different vegan soups and bean dishes.  I'll also take 2 or 3 fruits, a cooked vegetable and a couple servings of raw vegetables like celery, cucumber, sweet peppers or carrots.   This is more food than I used to eat, and I need almost all of my lunch break to eat it. 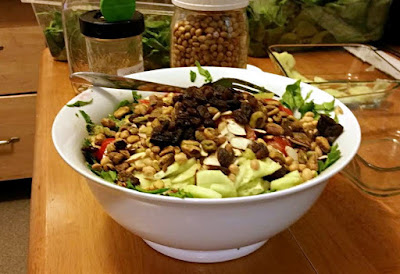 Dinner is most often a large salad (Large as in a serving bowl for one person) with lots of different ingredients-mostly kale and spinach, sometimes mixed lettuce (not iceberg--it is OK on the diet, but I don't like it as much) or cabbage.  Cabbage gets shredded, the other greens get run through the slicer blade of my food processor.  Tomatoes, cucumbers, nuts and seeds, usually half an avocado or a handful of canned beans or cooked frozen edamame.  Sometimes I'll add fruit, usually diced apples, sliced grapes and raisins, with a raspberry dressing and pistachios.  When I don't do fruit, I'll add raw onions and/or buffalo chickpeas (Frank's is milder than I expected here, sriracha sauce has a bit more bite)  At first I was entirely using commercial dressings that are supposed to be avoided, since then I've discovered a recipe for tahini-garlic dressing that I like, with Fuhrman-legal ingredients.  I add an extra clove of garlic, sometimes nutritional yeast, liquid aminos or fresh basil.  Other occasional salad ingredients are bell peppers, poblano peppers (mildly spicy) celery, carrots, radicchio, Mrs Dash garlic-herb.  Pomegranate turns out to be good in salad even with a garlic dressing.  I still have more nuts than Dr. Fuhrman recommends, and not entirely raw nuts.   Having lots of stuff makes a salad much more interesting--each bite is slightly different.

I'm no longer snacking after dinner or between meals (except when I run out of time to eat lunch I will sometimes finish on my next break), and that has been much easier than before the diet.  I've weaned off coffee and almost all caffeine, rarely drink diet or sweetened soda anymore--instead plain seltzer water with lemon.   If anything I'm a bit less tired than I used to be, and if I do need a temporary boost a can of diet pop is enough--that's every few weeks.

A food processor is nearly essential, used daily. I'm happy with the  Cuisinart I bought based on online reviews.  A high power blender is almost as important, especially for smoothies.  I've shopped at thrift stores for temporary clothing until I figure out what my permanent size is--I was to the point where my original pants would fall off without a belt, but still well above my goal weight.   Even my head has shrunk slightly, I had to adjust my bump cap at work 2 sizes.  Weekly weight loss seems to have slowed from 3-4 pounds per week to about 2 pounds--that might be due to less exercise, could also be slowing as I get closer to the goal weight.  I've gone from size 42 pants to 36.

Even though I haven't been as strict on salt reduction as Dr Fuhrman recommends, I have tried to add barely enough salt to taste good.  Combined with much less packaged food my taste for salt has changed--I used to love Campbell's bean with bacon soup.  It is now too salty to enjoy, like several other packaged foods I've tried.  Finding a restaurant with food that matches the diet is a bit hard, so far I've only tried Chipotle Sofritas.   I could probably manage at most salad bars, but I haven't tried that yet.

Christmas I went off diet a bit--about an ounce of ham, a small piece of no-bake cheesecake and one piece of my favorite Esther Price chocolate.  Neither of the sweets were as good as I'd remembered, and neither made resisting going farther off diet more difficult.  If I go back to eating chocolate at all, it will probably be very small pieces of dark semi-sweet instead of milk chocolate with caramel.

Posted by Sevesteen at 9:55 PM