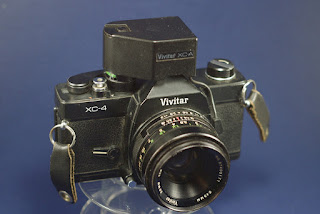 The Vivitar XC-4 has a peculiar mix of features. M42 screw-mount lens, with manual stop down metering, typical of off-brand cameras of the era.  Slightly unusual for an M42 camera are the electronically controlled cloth shutter and the LED metering instead of a mechanical meter.  Operation is a bit different than the typical stop-down camera--the lens stops down at the first half of the shutter travel and remains stopped down even when the shutter button is released.  What is very similar to the stop down button on a Minolta SRT series is actually a stop-down cancel--pushing it will re-open the lens to full aperture without having to take a picture.  Another minor oddity is the marking of the PC sockets on the front of the camera--there's the nearly universal X for a strobe flash, but instead of an M for bulbs, the other socket is unusually marked with an A. 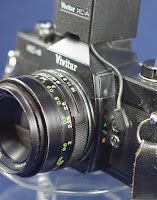 The XC-A accessory is one of the stranger ideas I've seen in cameras, and explains most of the oddities of the XC-4  The XC-A has its own 6v battery.  It clips on to the hot shoe and couples with the shutter dial like 60's era clip on meters. Unlike a clip on meter, there's no meter, no photocell, and no shutter control, and there is a cord that is just long enough to reach the PC socket marked A.
The XC-A turns the camera into a slightly clumsy stop-down aperture priority automatic camera.  Holding the shutter button halfway mechanically trips the lens stop down mechanism, turns on the meter and sends an electric signal out the A socket based on the meter reading.The XC-A reads this signal and mechanically turns the shutter speed dial until the exposure meter indicates "good".  After a second or so the shutter button stops whirring (There's a tiny ringing/clicking that remains) more pressure on the shutter button takes the picture.   If you hold the shutter and light changes, the shutter dial will track the light changes--but if you push the shutter early, the camera will take the picture before the exposure is set.
If I understand this right, the light meter sends an electronic signal out of the camera to be translated into mechanical motion, coupled back into the camera to physically turn the camera's shutter speed dial, which then sends a signal to the electronic shutter.

As far as I can tell this camera is working properly, although the light seals have turned to jelly.  It needed some exercise when I put batteries in the camera,  but after shooting and winding about 25 times the shutter became reasonably reliable.   The lens aperture blades are oily, and it needs the help of the aperture ring to return to wide open.  Battery was dead in my shutter speed tester, so I haven't tested it to see if it is worth film testing yet.
Posted by Sevesteen at 10:56 PM