Plastic crystals scratch easily. Luckily, they also polish easily--if you have the supplies handy, it takes about 5 minutes to restore most scratched plastic crystals to nearly new condition. This is a crystal that I deliberatly scuffed up to illustrate.

With a few minues work, you can turn it into this. Yes, this is the same crystal, and taken after the first picture.

You will need wet sandpaper in 600 grit, plus 400 and 320 or so for severely scuffed watches. Metal polish of some sort, (I use Wrights silver polish or Brasso) and an applicator of some sort. I use an old fuzzy mouse pad, both to cushion the sandpaper and to apply the metal polish. I've also used the back of a chunk of vinyl cloth--you want something just slightly absorbent, not too coarse, but stiff enough so it doesn't bunch up when you polish with it. 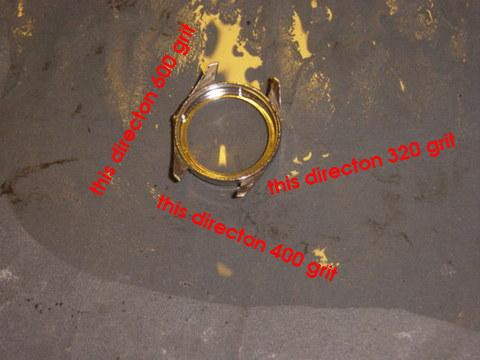 Put the sandpaper on the table, ideally on a slightly padded surface. Sand by moving the watch across the sandpaper. First sand across the direction of the worst scratches. with the coarsest sandpaper you will use. For most crystals, you will need to tip the watch case to get to the outside of the crystal. Pay close attention that you don't sand the case itself. A few drops of water will make the sandpaper last longer without getting clogged with plastic, but don't go overboard, especially if the watch isn't water resistant. Periodically stop and dry the crystal off to inspect. When you almost have the worst scratches sanded out, or sanded as much as you think appropriate (if you have one extremely deep scratch you may consider leaving it partially visible rather than thinning the entire crystal that much), switch to the next finer grade, and sand in a different direction. Once the scratches from the original sandpaper are sanded out, switch to the next finer grade and again sand across the direction of the previous sandpaper. Repeat until you get to the finest paper you will use--I recommend at least 600 grit. 400 will work as the final, but often leaves wavy areas.

You will wind up with an evenly frosted crystal. 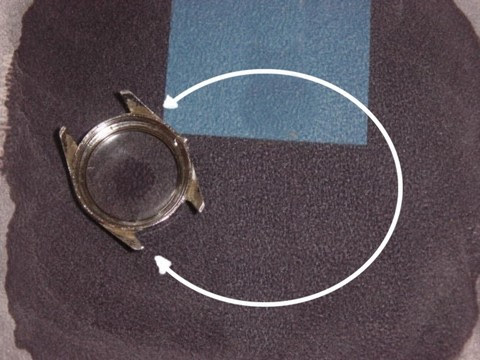 The final step is polish. Put a little polish on your polishing pad if it hasn't been used before, and possibly a drop or two of water. Run the watch in circles across the polish, again rocking to get the edges, and periodically drying and checking the condition. Avoid polishing the case, especially if goldtone.

You will probably wind up with a nice looking crystal, and a bunch of polish stuck in the cracks. A damp toothbrush works well to remove the excess polish. It works better if the bristles are cut to about half length.

I save the pad, and I don't need to put more polish on it most times.
Posted by Sevesteen at 10:55 PM