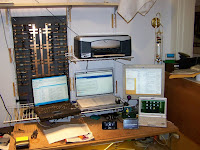 (Click to enlarge) The middle computer is my main laptop, with Ubuntu Linux. To the right is a second monitor from the main laptop. To the left is an old laptop running Windows XP, for Windows-only applications--Mostly iTunes and my GPS. Usually turned off. Below the second monitor is my EeePC, running the Easy Peasy version of Ubuntu Linux, so far my favorite for the Eee. All three computers have Synergy, a free program that lets me control all three computers from the keyboard (an IBM model M2 from 1990--Similar to the Model M, in a smaller package) and mouse from my main computer--scrolling down controls the EeePC, scrolling to the left takes me to the Windows XP computer. (Macs are also supported, but I have not tried that) Cut and paste usually works between computers, but can be buggy at times. The full size laptops are on wire Closetmaid shelving for better ventilation--this reduces the amount the fans have to run, and keeps my office a bit quieter.

The "frankenstein's lab" thing behind the left laptop is the fuse panel from a big old house behind the house I grew up in. Big knife blade switches, cartridge fuses, all exposed and mounted on an inch thick slab of slate. I don't know much more about it, except that it has fused neutrals, banned by the National Electric Code in 1928.
Posted by Sevesteen at 1:10 AM