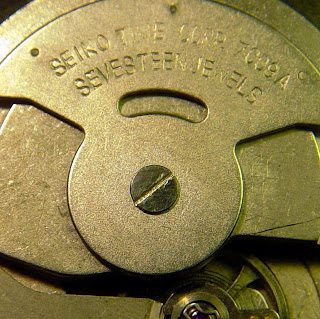 I was going through my SD cards, and found this image of the watch that I took my nickname from--A fake Seiko 5.
People who buy fake Rolex often know what they are getting. Fake Seikos are another story. In much of Asia and the middle east, mechanical watches are still preferred by many, in part due to difficulty getting batteries. The Seiko 5 is a workhorse--reliable, rugged and relatively inexpensive compared to other mechanical watches of similar durability and accuracy. It isn't pretentious, and is at the low end of mechanical watch price, usually available on Ebay for around $70 shipped for a new one. (At the time, you could get one for around $45)
Fake Seikos have been around for quite a while. Early ones were fairly obvious--Handwind 1 jewel pinlever rather than 17-23 jewel automatic, obviously poor quality and were often distributed with brands like "ASEIKOR" with dial markings that could be erased--an unscrupulous seller would erase the first and last letters. If you ever see a "Swiss Seiko" it is probably one of these, with a cheap Swiss pinlever. These were often "Electra 360" and would sometimes have a "21" on the dial--suggesting but not promising 21 jewels.
Modern fakes are harder to detect--for this reason Seiko has gone to a glass back on the genuine Seiko 5, because a convincing movement is much harder to fake. Fakes may use a glass back, but compared with a real Seiko the differences are obvious.
Unfortunately I did not know any of this when I bought the watch pictured. The biggest clue was the almost galvanized look of the fake's movement--while Seikos are finished functionally rather than with the fine polish of a luxury watch, they are considerably more attractive than this. The uneven look of the stamped letters are another clue, as is the misspelling "sevesteen jewels", as well as the jewel count on the rotor being different than the claimed 21 jewels on the dial. Finally, the movement doesn't match any Seiko movement.
Someone buying this watch would be expecting the equivalent of a Japanese car, but instead would wind up with a Yugo with a nice paint job.
When I realized that I had been taken, I sold the watch with full disclosure--in fact, I described it as "purchased new from Maimaichinaman. I have doubts about its authenticity, but apparently Ebay believes these to be real, because they continue to allow them to be sold after several notifications". Later I was sorry I sold it, and bought a similar watch from one of Maimaichinaman's dissatisfied customers so I could take it apart and compare it with a real Seiko.
Posted by Sevesteen at 9:46 PM