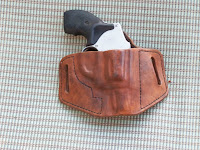 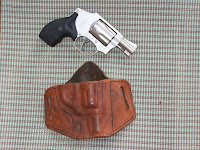 This is the second version of this holster.  In this one, I paid close attention and did not screw up the layout-- so the sweat shield was on the back where it belonged and I did not have to cut it off.  I am happier with the boning around the barrel and ejector.  I moved the rear loop about half an inch closer to the gun, and angled the front loop a bit, both attempts to get the grip to sit a little tighter to my body.   I also moved the stitching in a little closer to the gun--this is another gun where half an inch seems to be excessive.  So far it feels successful--retention is excellent, the draw is great--it feels like it is being held in by the boning, rather than friction.  It also re-holsters one handed. I used  better leather  than previous holsters--I picked up a double back from Tandy Leather in Columbus, significantly better than the belly I was using.

For the next holster I make, I am going to take a life-sized picture to help figure out where to concentrate the efforts of boning--this is especially necessary since I am still using the vacuum foodsaver bag to get the initial rough boning.
Posted by Sevesteen at 8:54 PM