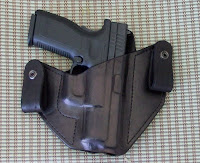 Patrick wanted me to make a holster for a 4" XD, so I did:  (click to enlarge)
The belt loops are temporary--I used pop rivets through the snaps to hold the loops to the holster, and the loops are scraps of slightly thicker leather of unknown provenance rather than the proper vegetable-tanned holster leather. The front button part of the snap wouldn't crimp right with the extra thickness, so I wound up using backs on both sides of the snap.  I don't like the belt loops as I've got them, but I think I can improve them, and give some adjustment capability without major effort.

I measured the thickness of the slide, and added half of that to the gun for the pocket sewing. Worked out well, except I think I will go a little closer for the bit of stitching just below the trigger.

I'll probably do the next version as a tuckable with clips--not so much because I want to tuck my shirt in, but because I think I will be happier with clips than loops.  Clips will give me more leeway around the grip area, and are a bit less bulky.   I may also reinforce the mouth of the holster, this one doesn't stay open as well as I would like when the gun is removed.

This isn't quite as comfortable as my Minotaur, but it is also for a much larger gun--The XD I carry in the Minotaur is an inch shorter in both barrel and grip.  I'm not used to carrying a full-sized gun.
Posted by Sevesteen at 11:16 PM