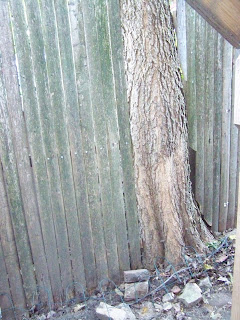 Our back yard is surrounded by a 6 foot high stockade fence. Most of it has been there longer than we have, at least 17 years with little maintenance. Several years ago a neighbor's tree fell and damaged one section, several trees on the property line are considerably larger than they were when the fence was installed pushing the fence inward-The tree to the left was originally on the other side of the fence. As it grew it pushed a section of fence with it, leaving a gap of about a foot. Many of the pickets were missing their tips. Between the trees and the damaged sections, it was not only ugly, but close to losing its ability to hold the dogs in. A couple of spots had some very ugly temporary repairs to maintain dog resistance.
Another issue was the location of the gate. I put it in when we got our dog Bella, to finish enclosing the yard. I set it up so the back door of the downstairs was inside the fence--at the time it made the most sense. Since then I have separated the house back into two separate apartments, built stairs into the back yard from the upstairs apartment, and moved upstairs. We plan to assign the back yard to the upstairs apartment when we rent the downstairs.
I decided to move the gate and do some slightly more permanent repairs to the fence--but I didn't want to spend much, because under any circumstances the fence isn't going to last all that much longer. My initial plan was to get 2 new 8 foot sections of fence for the gate area, and use the older weathered boards from there to patch the rest of the fence. It turned out I was able to move the gate using the existing fence and one new post, and still had more than enough to repair the rest of the fence. Rather than alter the fence line to get around the tree shown, I cut out a section for the tree, and restored the fence to its original line. I replaced the top support board on several sections, left most of the rest of the support boards alone. On one section the original installers had spliced in another 2 feet of fence rather than dig another post. This section was sagging badly. When I replace the fence entirely I'll dig another post, but for now I took the pickets off and replaced all 3 2x3 spliced supports with 10 foot 2x4.
The fence looks much, much better than it did, and it is no longer threatening to fall down. I'm out of shape.
Posted by Sevesteen at 11:15 PM