My aesthetics sense is usually that form follows function. I don't like bling, and I'm often puzzled that you have to pay extra to get some things plain instead of with extra plastic wood grain attached.

I like mechanical watches with a sub-seconds hand.
This is a 1908 Elgin that probably started life as a woman's pocket watch--I think the case is a late 20's or 30's style. The seconds hand has its own sub-dial at 6. Most mechanical watch movements (and clocks as well) have a gear that naturally rotates once per minute. Subsidiary seconds merely attach a hand to this gear. This was adequate on full-sized pocket watches, but when shrunk to wristwatch proportions they were quite small and relatively hard to read. There are some quartz watches with sub seconds, and for some reason they bother me--It feels like an affectation, adapting an inferior display for aesthetics rather than simplicity. Unlike a mechanical, the sub-seconds on a quartz is an add on device. 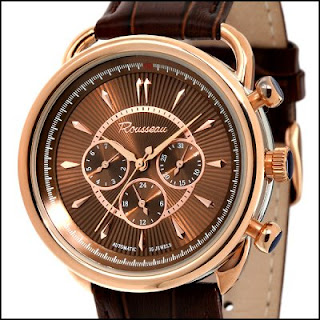 Pointer-calendar watches, especially with pushers to adjust the day and date are similarly false--They are meant to look like a chronograph, a combination of watch and stopwatch. (The old pointer-date watches with a "fourth" hand pointing to numbers around the edge of the dial are functional, and don't count as fake)

Some of my favorite clocks are anniversary clocks (also known as 400-day)--Mechanical clocks with a rotating pendulum that were wound once per year.
I dislike electric copies, even if they manage to look realistic from a distance. The battery-operated replicas lack the fantastic visible details of the real ones,
and the movement of the pendulum is usually a poor imitation. Again, added complexity for no good reason.

Another style problem is vinyl roofs. Although vinyl is rarely if ever an improvement, a plain vinyl top isn't necessarily horrible. When the top becomes a faux convertible,

then it begins to bother me. This car also sports a nice faux radiator shell, to go with its eye-searing paint scheme. The 70's Lincoln Marks were great at having just about every tacky feature possible.

In more recent times, Lincolns and Cadillacs have the faux-convertible look, but with framed doors, necessitating seams in the vinyl. This one was parked across the street from my house. It also has a sunroof in the middle of the "convertable" top.

Even worse (and I wasn't able to find a picture) is when they put a sunroof in a faux convertible, and/or make the chrome gold.

When my brother was young, he once asked me what vinyl roofs were for. I told him it was to make cars look better. He paused for a minute, and then said "No, really...What are they for? "

And of course no post on automotive style atrocities is complete without at least mentioning the the plastic Woodie station wagon. 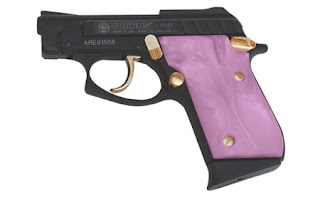 Taurus makes some hideous models of otherwise decent guns, like this black, pink and gold version of a Beretta Tomcat. They sell many of their models with gold accents. 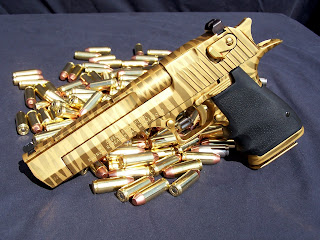 Ugly guns aren't complete without a gold, striped Desert Eagle. This isn't custom, it is a factory option. Not only is this gun hideously ugly, is huge--Shown below is a comparison with a Glock 17. 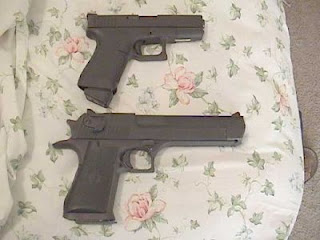 Posted by Sevesteen at 1:02 PM