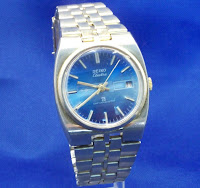 I bought a batch of ebay watches to fix and re-sell. One of them said it was a Seiko, although not even as convincing as the one that gave me my nickname. 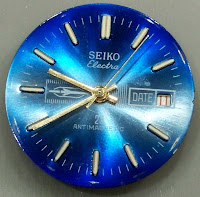 Fake Seikos have been a problem for decades. The older ones like this were typically Swiss or Hong Kong manual wind pinlever movements. They would be produced with a name like ASEIKOR, shipped to an unscrupulous retailer who would then remove the first and last letters on the dial. (I've removed letters on these with a q-tip and alcohol) Sometimes this was done well, on this particular watch there are fairly large smudges. I think these brands were produced by the same company that did Woldman--I've seen similar watches in both versions, and both have used the '360' and Electra' designations.

Genuine Seikos are mostly automatic wind, especially in the "mod" styles like this watch. The printed 'Date' is another sign of a cheap watch, designed to look like a day/date watch from a distance. "23" is meant to be mistaken for the "23 jewel" designation on some real Seikos. 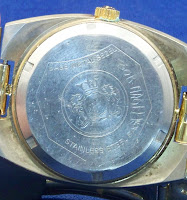 The back is another clue, both in cheapness and in the wording. Real Seikos will say Seiko on the back, will have an 8-digit model number and a serial number. 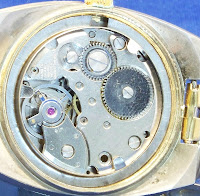 The final clue is the movement itself. Even the least expensive mechanical Seikos use decent quality jeweled movements, not one-jewel Roskopf style pinlevers.

Modern fakes are a lot harder to spot. They are typically made in Communist China. They have stainless steel cases and automatic movements that are quite similar in overall construction to genuine Seikos, while not matching any Seiko model. Some of the differences are in quality control, and far rougher finish of important parts like the escapement. Others are wrong details, like a single watch with several different movement numberss, or claiming to be a movement, but also claiming the wrong number of jewels. 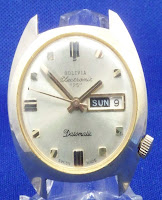 Around the same time were semi-fakes, with soundalike names designed to mislead--A "Bolivia electronic "25" Datomatic". Crown is at 4:00, like a Bulova Accutron, a watch that was legitimately electronic. Datomatic is in script, easy to confuse with "Automatic" , and amusingly, spelled "daytomatic" on the back.
None of this is new. In the late 1800's, America was the leader in pocket watches. There were imported Swiss watches with American sounding names, or sometimes with names of actual American companies.
Posted by Sevesteen at 3:20 PM