There is a balance between cost, risk and accessibility for storing self-defense guns. I believe that merely hiding guns is irresponsible if they will be unattended. Adequate storage is relatively cheap, with a little bit of creativity. I'm not a fan of individual gun locks--they are great to keep young kids from getting hurt, but they don't do nearly enough to keep the guns from being stolen where the lock can be dealt with at leisure.

I don't yet own any long guns. I've got a pistol safe, mounted in a discrete location that makes it awkward to pry or cut. Most of our guns are stored there. (I'm being deliberately vague with specifics) 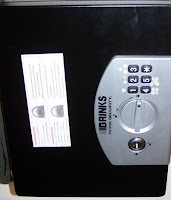 In the bedroom, I have a small digital-lock Brinks box, mounted and hidden. (Any portable lockbox should be mounted to something non-portable) It isn't as secure as the pistol safe, but it has the advantage of being quick access. The combination is more of a pattern--more digits than you might expect, but lots of repeat keystrokes, and I remember it by positions rather than number so I can do it in the dark.

With light, I can get my hand on a gun in the locked box in 4 seconds. about a second longer in the dark. If the first notice I have is when the attacker is already in the bedroom, even an unlocked container is likely too slow, but for most other circumstances, I can't think of anything faster with equal security. This box is primarily for my wife's convenience, and quick access is a secondary consideration. When I worked nights, she would often leave it open until I came home. If you are going to leave it open, I recommend putting your keys, cellphone or something you know you will take with you when you leave the house, to remind you to lock it before you go.

The guns are stored loaded, hanging from wooden dowels through their barrels, at an angle that leaves them easy to grip. The dowels are mounted to an angled hole in a piece of scrap plywood, which is in turn mounted to the box. I used fairly large dowels, and chucked them into a drill to sand them down to a caliber less than the gun barrel.
I also keep a few other things there--the hex wrench to tighten the belt clips on my holster, spare keys to things unrelated to guns, and the pocket holster for the Keltec.
Posted by Sevesteen at 11:15 PM