In the late 60's and early 70's, Bell & Howell were the US distributors for Canon cameras. The Bell & Howell Auto 35/Reflex is the US version of the Canon EX/EE introduced around 1969.   Shutter priority auto exposure with manual capability. 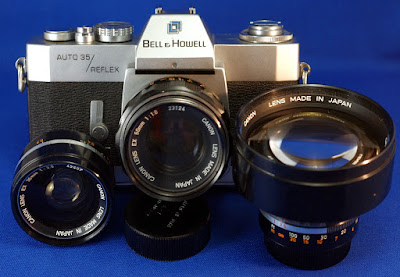 Rather than fully interchangeable lenses as most SLRs, it has a combination lens--the rear elements, focusing mechanism and diaphragm are fixed, the front elements are changeable with a simple screw thread.  In theory this is an optical compromise--but with the advantage of much cheaper accessory lenses since they only require the front optical elements and no mechanical parts. 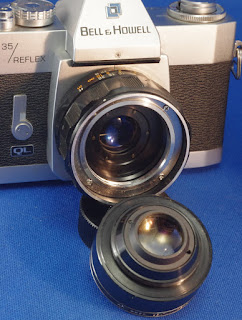 The diameter of the 125mm front element is large compared to conventional lenses of similar focal length--see the comparison to a Minolta f2.8 135mm below.  Front to back is about the same but the Minolta has a much smaller diameter despite a wider aperture.   Only 4 lenses were available, 35, 50 and 125 shown above, and a 90mm. 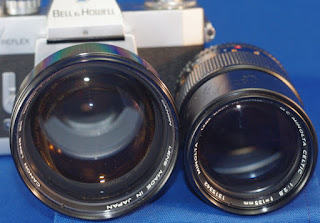 Aperture is either controlled by the auto exposure system, or it can be manually set by a dial around the rewind crank. In either case the aperture value is only visible via a needle display in the viewfinder, the dial only has 1.8 and 16 marked.  Lenses are either f:1.8 for the 50mm or 3.5 for the others, it is necessary to reset the film speed dial when changing from one type to another.  A peculiar result of this arrangement is that the maximum film speed is greater with the 50mm lens than the others.  The maximum marked is 800, but the 3.5 lens can only use about 500.  (Theoretically the 1.8 lens should be able to use around 2000--2 stops past the max of 500)  At the time 35mm film maxed out around 400. 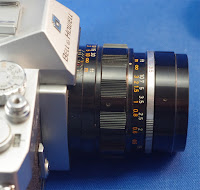 The main distance scale is only accurate for the normal lens.  On the accessory lenses there is a scale on the lens, with a dot on the focus ring. To use the scale the lens ring needs to be rotated to match, it appears to be easiest to set both to infinity.  Unlike the normal focus scale the dot moves and the scale remains stationary.

The viewfinder is a bit odd for a film SLR (but somewhat similar to modern DSLRs), likely to allow a bright screen despite relatively slow f3.5 lenses--the finder has no matte screen to judge depth of field, only a microprism for focus, and an uncommonly bright fresnel screen that is far more "in focus" than the film will be.  An additional advantage in an old camera is an exceptionally clean screen--since the rear lens never comes off, there is less opportunity for dust to stick to the focus screen.

Like the Sears Auto 500 from earlier, this is an easy to use automatic SLR with compromises to meet a price--but the photographic compromises are considerably less.

Posted by Sevesteen at 8:00 AM