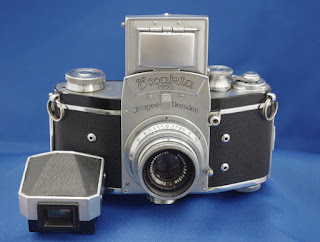 The Kine Exakta (also spelled Exacta, depending on the country it was exported to)  was the first mass produced 35mm SLR, introduced in 1936.  It was based on the VP Exakta .  Kine indicated 35mm cinema film.   It included a single stroke wind lever (most cameras still used knobs) a focal plane shutter and a wide variety if interchangeable lenses.  This camera is a 1952 VX, the US version of the Varex VX--very similar to the Kine except for the interchangeable viewfinder.

While the modern 35mm SLR dominated serious general purpose photography from the late 60's until digital,  early SLRs were specialty cameras, significantly more difficult to use than most other cameras. 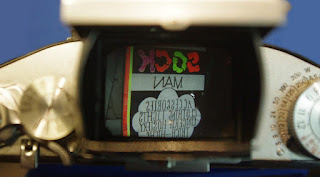 These early Exaktas had waist level viewfinders showing an image that was right side up but reversed left to right.  This made following moving subjects difficult, so the viewfinder hood had square holes cut in the front and back to use as a sports finder roughly approximating the view of a 50mm lens. 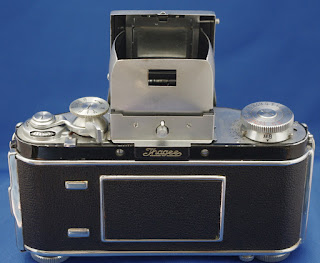 Focus was via ground glass, with a magnifier for fine focus.  No split image or microprism, so more difficult to focus than a rangefinder.  The mirror requires more distance between lens and film making wide angle lenses difficult.  On the other hand, since you use the taking lens to focus telephoto and macro lenses can be focused accurately and without parallax.  Rangefinders had difficulty with both.

The aperture affects the image in the viewfinder--smaller apertures dim the image and hide focusing errors, so it is necessary to set the aperture after focusing, then use the dim image to frame the final shot.  The procedure for taking a picture was to wind the film, calculate exposure (few cameras had meters yet, so use experience or a handheld meter), set the shutter speed, compose the picture in the reversed viewfinder, focus, set the aperture, re-frame the picture in the dimmer viewfinder then take the shot.  As soon as the shot is taken the view goes blank until the film is wound again.

With most other cameras the procedure would be to set both shutter and aperture in advance, frame and focus in one step and push the shutter.

A slight improvement was preset lenses, adding a preset aperture ring.  This did not control the aperture, rather it set the minimum aperture available on the other ring so the photographer could stop down by feel.  Eventually semiautomatic and automatic aperture lenses were introduced. These had their own shutter button over the camera's button, and pressing this would adjust the aperture before tripping the shutter.  Semiautomatic apertures didn't re-open automatically, there was a separate lever or button.

In 1949 Contax introduced the first SLR with a pentaprism--this allowed a normal view through the lens--right side up and unreversed.  Exakta began a series of running changes working towards an interchangeable viewfinder.  In 1950 all the pieces were ready, and Exacta introduced the Varex/V with an available pentaprism finder.

Posted by Sevesteen at 8:00 AM