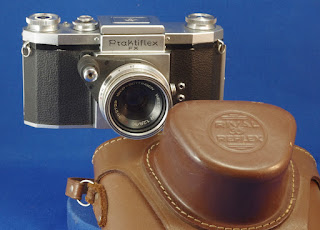 I bought this Praktiflx from Ebay, listed as "Praktiflex with original case"...except the case was labeled Rival Reflex.  Further research says that this is a version of the Praktica FX, one of the successors to the original Praktiflex.  This was sold under various names, including both Praktiflex FX and Rival Reflex.  I found an ad where the Rival Reflex was sold by Peerless Cameras, while the Praktica version was sold in the same ad for $10 more.  Some sources say that many of the alternate names were merely glued on badges--however all the pictures of the Rival show a screwed on badge.  It also appears that the usual practice on a rebadged camera was to (usually crudely) deface the original logo beneath the badge.   I'm pretty sure that this camera was not rebadged.   (click on pictures for larger versions) 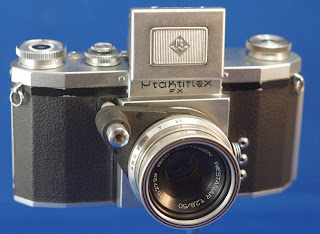 In many ways this camera is very similar to the Kine Exakta.  Like the Exakta it has a fixed waist level finder with ground glass and a magnifier, no focus aids.  A flip up cover lets the finder box double as a sport finder for standard lenses. Film advance is by knob rather than lever and the film counter is manually reset.  The back cover has no hinge, comes off entirely when changing film.  Shutter is a standard cloth focal plane. The shutter control is a dual range dial that rotates when the shutter is released and rotates back when the film is wound.  The upper dial selects fast or slow speeds, while the lower dial selects 1/25 through 1/500 or 1/2, 1/5 or 1/10.  B is available on either range.   Touching the dial as it rotates will affect the shutter speed. 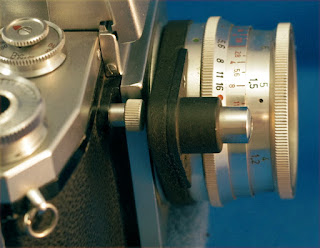 The lens mount is a very basic 42mm screw without the usual bar to operate a "modern" automatic aperture lens.  Instead the camera has an automatic aperture lens, similar in operation to many Exakta lenses.  In this style the lens has an arm that aligns with the front mounted shutter.  Pushing the button on this arm stops the lens down, pushing more trips the shutter.   On a camera without a matching shutter button this lens can be used as a preset, where the aperture is pre-selected on a ring while leaving the lens wide open with a lever to stop the lens down to the pre-set value.   Note, the Exakta version has the shutter and therefore the arm on the other side of the lens mount. 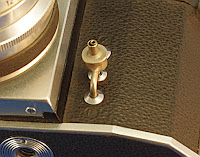 The FX in the model name refers to having both F and X flash sync available.  This was the 3 sockets that look like pop rivets on the body to the left side of the lens.  My camera came with an adapter to convert to a standard PC flash socket, unfortunately it has to be removed to change the lens.  Since the adapter hasn't been lost, I'm guessing that this camera didn't have any auxiliary lenses with it.

While the automatic aperture is a significant improvement over manual or preset lenses, it is still bulkier and more difficult to use than a rangefinder from the same era.  I'm not sure about relative prices at the time, eventually Praktica became a bargain brand, generally lagging behind Japanese competition. 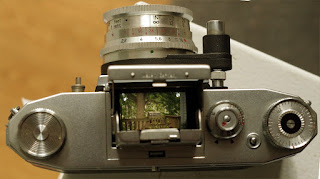