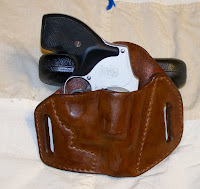 I have been using basic pancake holsters for my J frame to try new techniques--these are relatively simple, take less leather than for a bigger gun, and are fairly quick to make.   In this case, I was molding by clamping the holster and gun between dense foam rubber.  That part of the experiment worked reasonably well.  (as a side note--the foam rubber I was using for the backside had a pattern that transfered as almost a basketweave pattern.  Unfortunately the leather still needs to be touched up after molding, so I can't use this process as a decorative element)

I am not at all happy about the cut of the top of the pocket.  I did not leave enough leather along the top, so I wound up having to cut a ragged-looking line, and still did not get enough trigger coverage.  The trigger should be completely covered.  The small gap is probably not going to be a problem on a revolver, but probably isn't quite good enough for long-term use.  I am not sure exactly what happened, but I think I changed the cant between cutting the pattern and sewing the holster.

I was also trying to make the holster ride higher to be less likely to peak out from under my shirt.   I managed that, but in doing there isn't enough below the belt to keep the upper part tight against the body.  The J frame is small enough that it isn't a major problem, but it is not as comfortable as it should be. I had meant to angle the belt slots so the tops are closer together than the bottoms--this tends to pull the top inward.  However, like the top of the pocket, I did not leave myself enough leather.
With some of these "not quite what I meant" I've been able to sell them cheaply while pointing out their problems, and at least recover the materials cost.  The uncovered trigger means I can't let anyone else use this holster.  Once I make what I really intended, I will destroy this one.
Posted by Sevesteen at 11:40 PM